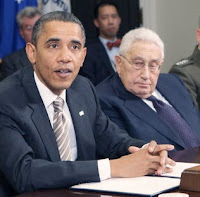 In his next book, Bob Woodward will probably tell us everything we need to know about the deliberations leading to the U.S. intervention in Libya that President Obama announced this morning. I have no insider sources. I do get the feeling that he's been dancing in the corner since the Arab revolution became a global story in January and that he decided this week that Muammar Qaddafi had finally rung the bell.

I'm sure it's not that he's been itching to go to war. No president in his right mind has such impulses. But unlike the risings in Tunisia and Egypt, Libya offers the opportunity for what may seem to Obama to be a relatively low-risk move in a region where the U.S. has profound interests and therefore historic obligations.

I actually heard five presidents during his forceful if awkwardly written statement this morning. George H.W. Bush must admire Obama's stress on acting as the leading member of a broad coalition and on the basis of the UN Security Council's authorization. One can imagine the intense diplomacy -- conducted while Sean Hannity joked that Obama was wasting his time playing golf and filling out his brackets -- by which Russia and China were persuaded to abstain rather than exercise their vetoes.

Obama echoed Bush 43's freedom agenda when he said he feared "the democratic values we stand for would be overrun" unless Qaddafi was stopped. Where and when our values have ever stood tall in Libya, Obama didn't say.

His stress on protecting civilians, which defined the limited scope of intervention, also made me think of Bill Clinton's regret that he didn't try to stop the Rwandan genocide.

Then there was Obama's own doctrine, putting his action in the larger context of the year's unprecedented uprisings against authoritarian Arab regimes. After two months in which the U.S. stood by while historic events unfolded, we've finally got a chance to throw our weight behind the good guys (whoever they are). As for outcomes, Obama said, they're "the right and responsibility" of Arabs, not us.

The weakest part of Obama's statement was its claim that Qaddafi threatens "global peace and security." He doesn't. Some talking heads said they heard no reference from Obama to U.S.-driven regime change, but I did, when he spoke of holding Qaddafi's regime "accountable" for its brutality.

That's the kind of language Henry Kissinger (and maybe Richard Nixon) might've suggested leaving out. In a phoner with Fox News' Megyn Kelly a half-hour before Obama spoke, Kissinger warned against trying to bring down Qaddafi. "If you engage in regime change," Kissinger said, "you then assume some responsibility for the successor regime and how to bring it about." Obama promised to keep U.S. troops out. But one thing that doesn't change, no matter the president, is the law of unintended consequences during military interventions, especially when the dynamics and personalities are as murky as in tribal Libya. Good first round for Obama against the ruthless and wily veteran of the north African desert. Eleven to go.
By Fr. John at 11:00 AM