How Not To Do More Than We Should In Libya 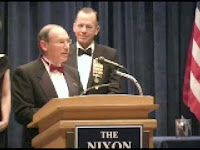 Former Pentagon official Dov Zakheim (whose name I used to mispronounce while MCing Nixon Center dinners in the old days; it does not, he finally told me genially, rhyme with l'chiam) describes how the Europeans and Arab League maneuvered the Obama administration into joining the anti-Qaddafi military coalition. Looking ahead:

Calling for Arab participation in military action is not enough; it will not get the U.S. off the military hook. The administration should make it clear that America's role will be limited to providing logistical and intelligence support, and enforcing a no-fly zone, wh

ile its allies attack Qaddafi's troops on the ground. The Arabs could do this, or the British, or the French, or some combination of all three and of others who wish to join in. At most, the U.S. should take out Libya's air defenses, which stand in the way of an effective no-fly zone. Even that operation could be conducted by the NATO allies.

Zak-Heim is above left. Why do I include a photo of me in a rented tux at one of the last events I attended at the Center Formerly Known As Nixon? Because I can! On that occasion, and every day since the Nixon Center opened its doors in November 1994, the foreign policy institution which Nixon founded and to which he personally had lent his name -- housing experts with names like Kissinger, Schlesinger, Zacheim, Simes, Kemp, Saunders, and Rodman -- had something to say about vital events of the day such as the Libya intervention.

But on this historic day, Nixon's legacy is silent. His own center threw him over the side, and the lower-echelon, non-policy Nixon-Haldeman operatives now controlling Nixon's foundation -- also parties to the mysterious transaction that neutered Nixon's center -- have nothing to say about Libya.
By Fr. John at 9:10 PM