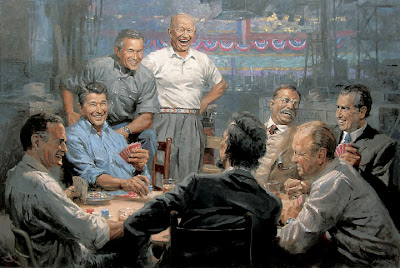 Tonight Fox News' Sean Hannity used the bludgeon of his imaginary Ronald Reagan (the one who didn't enact $400 billion a year in tax increases) to try to get Sen. Scott Brown (R-Mass.) to attack Barack Obama on fiscal policy and stick up for Wisconsin Gov. Scott Walker's attempt to limit public employees' collective bargaining rights. Brown said that he'd prefer to work with Obama than attack him and that Wisconsin's policies were Wisconsin's business.

While Hannity's contempt for Brown was palpable, the senator kept his cool -- which got me wondering whether Brown might have what it takes to sit at the poker table.

Read historian Maarja Krusten's thoughts on the virtue of keeping our cool here.
By Fr. John at 7:46 PM