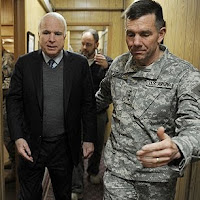 I was wondering why I was having trouble getting especially worked up at the idea of the brass in Afghanistan using psy-ops on visiting legislators, as alleged in "Rolling Stone." Here's why, from Juliet Lapidos at "Slate":

The idea that, given a U.S. senator as a target, a psy-ops team could "plant" the urge, Inception-style, to give the Army more resources is fairly nonsensical. Psy-ops teams use persuasion, not mind control. If [Gen. William] Caldwell [shown here with Sen. McCain] really did want [whistle blower Michael] Holmes and others to compile detailed profiles of John McCain and others, including their voting records and opinions on hot-button issues, he might as well have assigned such research work to his public affairs staff. (The difference between psy-ops and public affairs is that the purpose of the former is influence and it's supposed to be directed at foreign audiences exclusively, whereas the latter merely informs audiences both at home and abroad. But the distinction can get hazy. A 1997 Army field manual on public affairs notes that the discipline helps the United States "achieve information dominance" and "contributes to the preservation of public support," which seems to edge into influence.)

If military personnel have really broken the law, they should be held accountable. Senators and congressmen are entitled to receive strictly factual briefings, whether in Kabul or wherever they interact with government personnel. I also could understand how a member might get upset learning that the Pentagon had used taxpayers' money to study whether his having been bullied by his high school football coach might make him more inclined to fork over funds for killing the Taliban.

But people of substance engaged in important work always go into meetings hoping to bring back something for their side, and generals are no different. If you're canny, you'll want to learn a little something about the person you're talking to first. Call it psy-ops, or call it empathy.

What astonishes me is the idea that you could be a member of Congress and be all that susceptible to being emotionally manipulated. Wouldn't the members of most congressional delegations have spent the 16-hour flight reading about Afghanistan and getting ready for the meetings themselves? If not -- if the generals are taking these conversations more seriously than the congresspeople -- where's the real scandal?
By Fr. John at 2:22 PM

I glanced through the RS piece and had much the reaction you might expect me to as a civil servant. What are the rules and to what extent do subordinates have the ability to say, "wait, this might not look good, can you reconsider?" I focus on things like that, for obvious reasons.

I've tried to figure out if I actually was a conservative when I voted for Reagan, twice. Probably not, more likely a Nixon and Eisenhower Republican. After I became an Independent some 20 years ago, I wondered if I didn't perhaps have a Libertarian streak. Over the last couple of years, as I've watched the ends justify the means vibe that surrounds a lot of the attacks on Obama (and before him on Bush and Clinton), I've concluded that the areas where strong regulation is needed are not the ones that social conservatives focus on, but in certain workplaces. (Personal morality starts at home and comes to the fore at the start of many of the issues social conservatives focus on, in my view, rather than the end. There's no way for government to regulate the aspects of human relations I'm thinking of, nor should it.)

It's in the workplace that you need the ability to tell a superior something is wrong or to go to corporate counsel or an agency lawyer to back you up on ethics issues. If it's every man for himself, you have nothing to fall back on except individuals' character, which often is weak. I used to be more receptive to conservatives' anti-regulatory pitches until I saw the way people reacted to Limbaugh, Beck, some of Palin's shenanigans, etc. (largely applauding it on the right, or sitting silent. As Sullivan points out, however, that has changed just a little in recent months. At least the Frum-tyes speak out for more honorable advocacy.) It was quite an eye opener to me to see what demagogues been able to get away with the last few years. No thanks, let's keep some of the workplace rules in place to protect employees from that end justifies the means thinking. Different cultures in the military and civilian sector but each depend on following rules, guidelines, protocols, etc., many of which are there for good reason. To protect man from himself! In this particular case, I'll just watch and see what the people who look into the matter conclude about it, I don't know the military culture very well.

Thanks, MK. The propriety of the alleged order to use psy-ops aside (and I really don't leave it aside; rules are rules), the impression I got from the article and subsequent coverage is that at the root of the effort was the military's somewhat contemptuous assumption that it could manipulate weak-minded or less well-prepared CODEL members. And if that's the case, since the military mind probably isn't going to change, maybe our elected reps should do a little more homework.

I remember how hard Nixon, as an ex-president, prepared for meetings with foreign officials. He always went in with a good idea of what he wanted to say and what the other person probably would say and want. He also compared what different people told him about the same subject.

If senators and congressmen aren't willing to work as hard as an out-of-office president, I don't feet too sorry for them if the generals and colonels run rings around them.