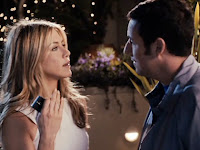 My exercise after seeing "Just Go With It," starring Adam Sandler as a plastic surgeon and Jennifer Aniston as his single-mother assistant, was identifying a redeeming, unblemished feature. Sandler and Aniston had good chemistry in a couple of scenes -- but their winsomeness was nearly crushed by a leaden script. Aniston's kids, played by Bailee Madison and Griffin Gluck, were talented and cute -- but for some reason ten-year-old Bailee spent most of the movie using a tiresome British accent. Nicole Kidman was great as Aniston's college nemesis, with Dave Matthews as her too-good-to-be-true husband, reputedly the inventor of the iPod -- but that deteriorated into mockery of gay men. Rachel Dratch and Kevin Nealon were funny as plastic surgery victims -- but the depth of the film's insights on the subject was purely cosmetic.

You want unmitigated praise? The Hawaiian resort where the hi jinks unfolded looked very nice. And Nick Swardson, pretending to be a sheep salesman for reasons too complicated to explain, had a great moment after a young woman ran into the restaurant where he and Brooklyn Decker, who plays Sandler's girlfriend, were eating and said that her sheep was sick.What do you do with a sick sheep? Body slams and mouth-to-mouth, of course.

More broadly applied, the Farrelly brothers-style lunacy of Swardson's improvised lamb chops might've resuscitated the movie. Sandler was pretending to be married to win Decker; Aniston was pretending to be his husband; Kidman was still pretending to be all that. A mistaken-identity plot and great cast ought to have made for a lot of fun. But "Just Go With It," a title with no discernible connection to the story, ended up being a description of a comic road not taken.
By Fr. John at 10:00 AM