The Ideology Of The Word Of God 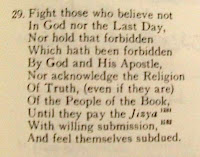 If you want to learn more about Egypt's Muslim Brotherhood, read Jack Shenker and Brian Whitaker's Guardian article, where we also learn that Muslims as well as Christians grapple with the dictates of scripture in changing historical circumstances:

The Brotherhood continues to maintain that "Islam is the solution" while at the same time demonstrating a kind of pragmatism that suggests Islam may not be a complete solution after all.

One example is jizya, the poll tax on non-Muslims, which is clearly prescribed in the Qur'an. The original idea was that non-Muslims, since they did not serve in the military, should pay for their protection by Muslims.

Today, most Muslims regard jizya as obsolete. In order to follow Qur'anic principles strictly, though, it would have to be reinstated. In 1997, the Muslim Brotherhood's Supreme Guide at the time, Mustafa Mashhur, did suggest reintroducing it but, in a country with around 6 million Christians, this caused uproar and the movement later backtracked. For non-Islamist Muslims, jizya presents no great problem: they can justify its abolition on the basis of historicity – that the circumstances in which the tax was imposed no longer exist today. For Islamists, though, this is much more difficult because the words of the Qur'an and the practices of the earliest Muslims form the core of their ideology.

The late Nasr Abu Zayd, a liberal theologian who was hounded out of Egypt by Islamists in the 1990s, regarded historicity as the crux of the issue. "If they concede historicity, all the ideology will just fall down," he said, "… the entire ideology of the word of God."

Could it be that each of the three great monotheistic religions has a core weakness? For Judaism, the notion of a "Chosen People" tends to reduce the rest of humankind to also ran status; Christianity has the millstone of anti-Semitism (or at least the seed thereof) in its canonical writings; and (3) Islam presents the Quoran as the inerrant dictation of Allah, so historicity is not too viable since Allah knew the future.

Well said, Juan. The interfaith and sometimes interdenominational dilemma is that most religions make exclusive salvation claims. It's the largest part of what makes them religions. As you say, each Abrahamic faith claims to have superseded the one before. I end up preaching humility, but that doesn't help build a church or fulfill God's call to evangelize. And yet you get mature, highly spiritual Jews, Christians, and Muslims together (and Buddhists, and Hindi) and they're likely to find more that unites than divides them.

A friend once shared an interesting insight on the
Trinity--I doubt whether it was original to him. He said that the Trinity makes sense because God the Father alone suggests deism; the Son alone, adolatry, and the Holy Spirit alone, pantheism. This little exercise, of course, doesn't really address the Great Mystery, but I like this analysis--no spare parts left over. A little off topic, but just thought to throw it in.