The Book On Throwing The Book At Clinton 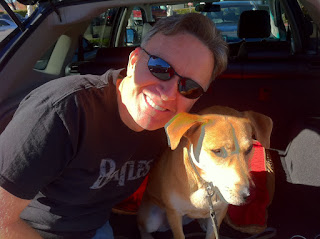 As a GOP congressman from a Democratic-leaning district in the San Gabriel Valley, Jim Rogan essentially announced his retirement when he agreed to be one of the managers of President Clinton's impeachment trial before the U.S. Senate in January 1999. After Clinton was acquitted, the White House and DNC placed Jim's name at the top of their list of ripe targets in the 2000 election. He lost to Democrat Adam Schiff.

Think what you will about the impeachment. Jim thought of it an opportunity to do his duty even in the face of certain political doom. After serving in the Bush administration, Jim has settled into his work as a Superior Court judge while he and his gracious wife, Christine, and their two ebullient daughters (not to mention Sparky), have settled into life in Yorba Linda.

At Starbucks today, he told me his long-awaited second book, Catching Our Flag: Behind The Scenes Of A Presidential Impeachment, is about to be published. It's based on detailed notes he took of every meeting and conversation in which he participated as one of the 13 case managers. If there's a record for the fastest a Washington VIP has ever turned to his name in an index, my guess is that it will be broken by Sen. Lindsey Graham, the most nationally prominent of the 13 managers, on May 3, the pub date of Catching Our Flag.
By Fr. John at 3:54 PM

Ah yes, members can take their papers with them and dispose of them at will. Not like executive branch employees, whose records fall under the Federal Records Act.

I wonder if he eventually will donate the notes (or some portion of them -- archivists would want the full set to screen for disclosure for researchers but I don't know how many survived over time or would make it into the hands of professional archivists) to a local historical society or university library's special collections section.

Now that Clinton is long out of office, I can say that I think impeaching him for his testimony on the Lewinsky matter was flawed tactically. To me, it seemed as if the decision to do so took place in some kind of bubble, without considering how ordinary, flawed human beings struggle with their lives and relations with others.

Opinion polls showed a lot of sympathy for Clinton after the publication of the Starr Report. My guess is that many men, and some women, shuddered and thought, "these are private issues, to be worked out between couples and within families, as the case may be. Many people are weak and err in their relations with others, intimate and otherwise. Most don't have the details shared with the world so publicly. Yikes, what if this happened to my family? [shudder]"

Yes, there was the question of lying under oath. But not about a governmental matter. Moreover, this occurred during the culture wars. I had left the GOP and decided to become an Independent long before then, around 1989. But I remember thinking during the impeachment crisis, "Ouch. Huge mistake. Here you have a party which accuses the Democrats of wanting to create a nanny state. Yet its social conservative supporters are pushing issues that I largely view as personal and non-governmental, involving men and women and how they handle issues relating to or resulting from intimate relations, into the forefront during the 1990s. That's nannyism from the other side, just as intrusive as what they accuse Democrats of doing. Now a man and his wife are being humiliated for their purely private family drama which may have involved lying under oath. We're going through this as a nation after Bill and Hillary have been demonized endlessly by talk radio and other conservative leaning outlets. So what is it really about? Punishment? Displacement? I do not like treating policy disagreements by taking actions in non-policy that are so humiliatingly punitive towards those of the other party. No return to the GOP for me, I'll stay firmly unaffiliated with either party, thank you very much." And that's how I've stayed ever since!

I'm not sure if Jim's made a provision for depositing his impeachment notes somewhere. I'll ask him the next time we meet at Starbucks!

I felt the Clinton impeachment, the Nixon impeachment effort in retrospect, and indeed the Gray Davis gubernatorial recall in '03 in California all had the coloration of the opposition trying to reverse the outcome of the election it had just lost. Jim Rogan and others demur. I understand that in each effort there were people who were motivated by a sense of what was just and right. But overall both impeachments felt politically opportunistic.

It would be great if he would donate the materials to an archival repository, with a deed of gift as a convenyance. (Not just deposit with retention of ownership.) That would enable disinterested professional archivists (to use the term once used about us at NARA) to release the disclosable portions to whomoever wishes to do research in them.

I'll have to read the reviews before I decide whether to read the book. Right now I'm inclined not to, simply because I don't want to encourage the use of the word flag in book titles about contentious events. It's as simple as not wanting to reward that type of behavior. You notice I'm wearing a heartshaped U.S. flag pin on my blog author photo, which was taken in February 2004. On 9/11/01, I actually dug around in my dresser drawer and found the old flag pin I had bought and worn while Nixon, for whom I had voted, was President. But by 9/11/04, I had stopped wearing flag pins where anyone could see them. As a form of rebellion against the implication that Republicans were patriotic and Democrats weren't, I, a former Republican and Independent, started wearing a flag pin pinned to the linking of my suit jacket on 9/11, close to my heart but where no one could see it. I did not want to be mistaken for someone who disdained the patriotism of Americans no matter how they voted. So I showed my disdain for the snark about who was patriotic and who "wasn't" by starting to wear one where it could not be seen!

As to the impeachments, I feel that Clinton's should not have occurred. (Have you read The Death of American Virtue, by Ken Gormley? Fascinating account of missteps by both sides during the Ken Starr Clinton era investigations.) I already was wary of the Clinton Derangement Syndrome displayed by some on the right (especially about Vince Foster), and the nannyism shown by social conservatives in areas I thought were personal and private and best left to people, their families, and their churches, if they belonged to such. The impeachment was the final straw for me. It made me realize I never would "caucus" with Republicans again although I did actually vote for some in local, state or federal elections after 1998 (as I also did for Democrats). Too intrusive, unrelated to governmental activities. Of course, I carry the baggage of a cynic who tends to ask "yeah, where were you when we at NARA needed you in our efforts to open Nixon's records," when people on the right point to "doing the right" thing.

I have mixed feelings about the plants to impeach Nixon. At the time, I felt such an action was unwarranted. Having specialized in the abuse of governmental power materials in my work at NARA, I've grown ambivalent about that. That's due to hearing the conversations about using Secret Service agents to spy on Ted Kennedy and about replacing Jewish civil servants with loyalists at the BLS. To some extent I reflect modern day values. If you accept Jonathan Haidt's analysis that the right puts a higher premium on in-group loyalty and obedience to authority than the left, then there is a greater chance now than in Nixon's day that officials in a GOP administration will take a view that the end justifies the means. That places people with non-partisan missions, such as mine at NARA, at greater risk than under a Democratic administration. As a civil servant for 38 years, my loyalty, if I still were at NARA, would be to the public trust. I think that is easier to sell Democrats on than Republicans, unfortunately. Had the GOP developed into a party of personal responsibility and accountability after Nixon, which it did not, I might still say with certainty that impeachment would have been wrong. Since it moved the other way, I have mixed feelings about the Nixon impeachment issue.