I Could Also Have Held The Garbanzo Beans 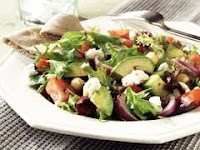 At California Pizza Kitchen on Saturday night, I piously decided on the Mediterranean chopped salad instead of cheese and pepperoni. Then I saw on the menu that my choice (including the optional garbanzo beans) was about 1100 calories, enough to sustain a family of four on a life raft for two days.

The source of this discouraging information? The first lady, who got the requirement into the health care bill. To which I say, "Thanks, Mrs. Obama." I wasn't wild at first about mandatory calorie counts when New York City adopted them a few years ago, because I was afraid it would hurt the industry. But I haven't read any evidence of it. After all, I went ahead and ate the salad.

And while Sarah Palin may take a different view, I don't thinking force-feeding calorie counts puts my basic human freedoms at risk. Information is almost always a good thing. Knowing about that honking fat salad, next time I might: a) Look for healthier or smaller choices on the menu (such as the half-order of the same thing). b) Go to a different restaurant. c) Just get the cheese and pepperoni.
By Fr. John at 9:54 AM

More information is always good. I feel like my freedom is impeded more when I cannot find the nutritional information or sources for the ingredients on the menu. I want to make informed choices and I don't like the paternalism of a corporate mantra of "we know best."