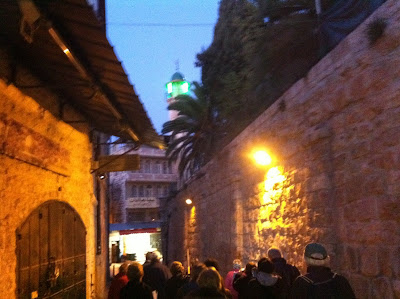 Beginning before dawn Saturday, we walked along the Via Dolorosa through the Old City of Jerusalem, ending in the Church of the Holy Sepulcher. Each of us had one more moment to touch the rock of Golgotha and hear the chants and the organ and smell the incense and meet the lively eyes of pilgrims from all over the world and come as close as we could to our God in Christ. For that, there are no words, and the best pictures are the ones we can't quite show you. To experience it yourself, ask for God's grace, and if you can, come to Jerusalem. As our guide, we used A Walk In Jerusalem: Stations Of The Cross by John Peterson, former dean of St. George's Cathedral and secretary general of the Anglican Communion. 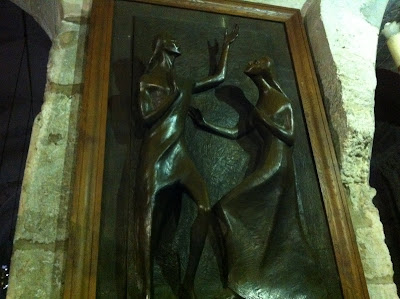 Fr. Fergus Clarke, a Franciscan assigned to the Holy Sepulcher, told us yesterday that, based on what we know about the first century role of women, if Mary Magdalene hadn't been the first witness to Jesus Christ's resurrection, nobody would have gone to the trouble of making up a culturally incorrect story claiming that she was. Imagine that: Proof both that Jesus rose again and that men are wrong to keep women down in the church. This sculpture hangs behind the altar in the Holy Sepulcher's Chapel of St. Mary Magdalene. 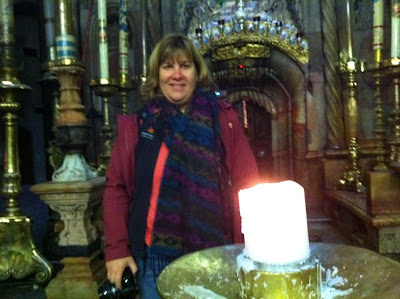 If anyone tells you that Christians can't agree on anything, tell him this: We agree that Jesus rose from the dead at a spot about 20 paces behind pilgrim Andrea. The building, called the Edicule, and the slab it encloses are relatively new. Beneath them is the rock of the tomb itself, which people have venerated since the resurrection moment. Fr. Fergus told us that when the Romans tried to obliterate it in the second century and built a Roman temple in its place, Christians dug a secret tunnel under the temple and found the tomb. 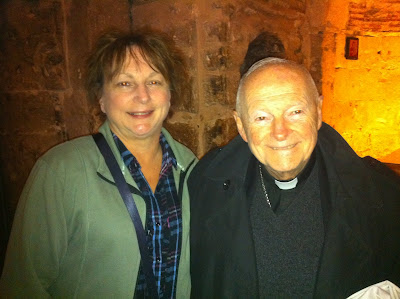 Pilgrim Kathy met a friend at the Holy Sepulcher this morning: Cardinal Theodore McCarrick, former archbishop of Washington, D.C. You may remember him from the memorial service at Washington National Cathedral following the Sept. 11 attacks. Kathy knows him through her work as former President Nixon's last chief of staff. While the cardinal had been to the Holy Sepulcher many times, this was his first visit to the Adam Chapel, where the split rock of Golgotha is visible through a window behind the altar.
By Fr. John at 10:43 PM