At The Center Of The World 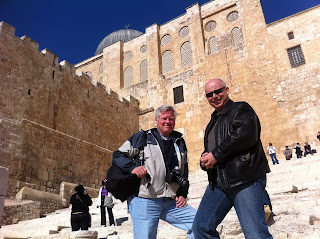 During two Holy Land pilgrimages and the 18 months in between, pilgrim Andy and I have been carrying on a conversation about the Middle East. It hasn't really been a debate, since we're both strong supporters of Israel who are working to deepen our appreciation of the immense complexities of the issue and of the necessity for a just provision for Palestinians' right of self-determination.

We rarely have the opportunity we did today to conduct our discussion at the epicenter of the crisis. We were standing with our fellow pilgrims inside the Jerusalem Archaeological Park, on steps leading to a walled-up spot that was once an entrance to the Second Temple. The towering wall at our back faces south. You can see Herodian (which is to say time of Jesus Christ) stones at the bottom and the windows and blue dome of the al-Aqsa mosque on top. Could Jesus have climbed these steps on one of his visits to the temple from Bethany, on the Mount of Olives (to our left)? Pretty likely. So you have 2,500 years of religious history and explosive interfaith rivalry inside a few square feet. For the faithfully political (or the politically faithful), it's pretty much the center of the world.

Since pilgrim Kathy, junior archaeologist, was helping injured pilgrim Pam prepare for her much-regretted early departure for the U.S. tonight, she didn't go with our group this morning. I retraced our footsteps with her this afternoon. That's she amid the massive stones that Roman soldiers threw down from the Temple Mount when they destroyed the Second Temple in A.D. 70 -- the very ones of which Jesus said in Mark 13:2b, "Not one stone will be left here upon another; all will be thrown down." You can't get much closer to history than that, in this place where peace sometimes feels as far away as it can be. 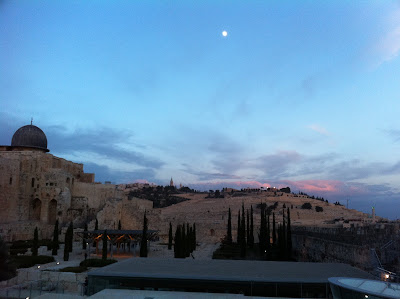 The Al-Aqsa mosque and Mount of Olives, from the Jerusalem Archaeological Park
By Fr. John at 1:27 PM