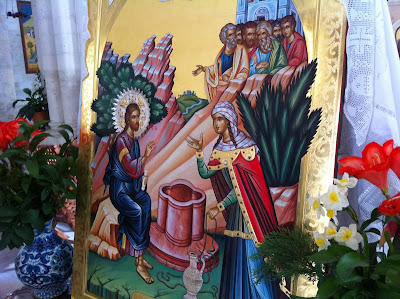 We St. John's pilgrims saw this painting of Jesus Christ and the Samaritan woman along with other breathtaking images in the West Bank city of Nablus today, in a church built over Jacob's well, where the encounter described in John 4:1-30 occurred. We've visited

no more sacred a place so far. Abraham visited here when it was called Shechem. Joshua gathered the tribes of Israel here and called them to renew their worship of God in sincerity and faithfulness (Josh. 24:14). For the Samaritans of Jesus's time, Shechem was as sacred as the Second Temple was to Jews in Jerusalem.

As for the gospel story, which the evangelist said occurred as Jesus made his way from Jerusalem to Galilee, this is the only place known as Jacob's well. There's plenty of ambiguity about the actual location of the Upper Room and Emmaus, for instance, but none whatsoever about this spot. Pilgrim Daphne (shown outside the church with her mother, pilgrim Ellie) lowered a bucket 150 feet down and raised it filled to the brim, and we drank from the same spring that the evangelist says nourished our Lord.