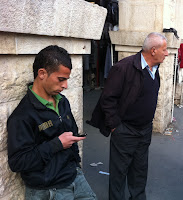 The other day outside Jerusalem's Old City, an Arab man (not one of these guys) came up to one of our St. John's pilgrims and said in a voice that was neither friendly nor threatening, "Fifteen years, Hamas."

I've added the comma, of course. What do you think it means?

Hamas was founded in 1987, so he could've been jumping the gun on "Happy Birthday." Or he could've been announcing how long he'd been a member of the radical Islamist movement that now controls Gaza, but why would my fellow pilgrim care?

Perhaps it's evidence that the man in the east Jerusalem street is as mindful of demographic trends as western observers. According to Israel's Central Bureau of Statistics, by 2025 its population will be only 70% Jewish, compared with 78% in 2000. Looking a little further ahead, another study predicts that by 2040, 78% of Israeli schoolchildren will be either offspring of ultra-Orthodox Jews (most of whom don't believe that Israel should have statehood before the messiah comes) or Arabs (many of whom are and may remain ambivalent about a Jewish state). Whether or not Hamas comes to dominate a future Palestine, as some predict, one could easily see how Israel could be squeezed in a massive population pincer movement.

Our earnest prognosticator may simply have been saying that Hamas will supplant the more moderate Fatah as rulers of a united Palestine. Or my friend may have been hearing a prediction that as early as 2026, by virtue of peaceful diplomacy and implacable demographics, Israel will be swallowed by an Islamist Palestine.
By Fr. John at 6:58 AM