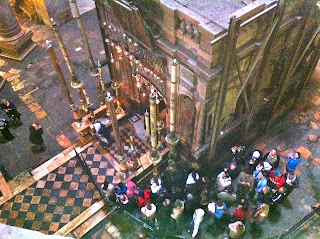 The view of the Edicule, which encloses Jesus Christ's tomb, from the Latin balcony of the Church of the Holy Sepulcher in Jerusalem. On Friday morning pilgrims DJ, Duane, and I got the friar's tour from the Rev. Fergus Clarke, friend of my friend Charlie Frazee and one of the priests who helps care for the church.

Six Christian denominations govern it under a 19th century arrangement brokered by the Ottoman Turks called the status quo. While the churches agree about little other than that this was the place of Jesus's resurrection, it's enough to keep them cohabitating in what Fr. Fergus variously called a delicate ecosystem or, even more

fraught with peril, a long marriage. Just as a couple can have a crisis if a spouse leaves the dental floss out every night, things can go terribly wrong in the Holy Sepulcher if a sewer pipe breaks or someone starts a service too early, leaves a chapel door open when another denomination is processing past, or moves a chair.

Reporters often make fun of the monks for clashing over seemingly trivial things. "But 360 or 363 days a year, it's usually fine," Fergus said. I'm going to be learning more about how this community manages to subsume its permanent and likely irresolvable theological differences under the higher interest of remaining in relationship for the sake of serving the risen Christ.
By Fr. John at 11:38 AM