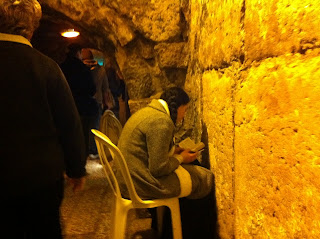 We're used to seeing Jews (and the occasional Gentile) praying at the Western Wall in Jerusalem. But nearly 500 more meters of the wall have been uncovered by Israeli archaeologists digging beneath the Muslim Quarter. A result of their work is the Western Wall Tunnel, which pilgrims Andy, Deb, Kathy, Leslie, Loreen, and I visited t

onight. About halfway through, where this young woman was praying, is the point experts surmise is the closest (94 meters) to what Jews call the foundation stone. Also understood to be the biblical Mt. Moriah as well as the place from which Mohammad ascended to heaven, the stone is now enclosed by the Dome of the Rock, one of the two principal Muslim installations on the Temple Mount.

Work on the tunnel excavations began soon after Israel defeated the Arabs in 1967 and won back control of the Old City. Fascinating as the attraction is, it's as much politics as tourism. Muslims know as well as anyone that the tunnel excavations are under the ultimate authority of orthodox rabbis, not archaeologists. Property owners in the Muslim Quarter complained that the dig weakened the foundations of their homes and businesses. Once the rabbi in charge ordered his crews to start digging under the Temple Mount itself until the Israeli government got wind of it and stopped

As a matter of fact, all of Israel's digs along the perimeters of Herod the Great's walls give the impression of being aimed not only at gaining insights about the Second Temple period but also undermining the theological authority and perhaps even the physical integrity of the Dome of the Rock and al-Aqsa mosque. When Israel first announced plans in 1996 to open a northern exit for the tunnel exhibit, which Muslims said would be an encroachment on their territory, 80 people lost their lives in protest riots

The polemical quotient was pretty high this evening. Our guide, David, was an orthodox Jew who confirmed to pilgrim Andy that he believed the world was 6,000 years old, just as Torah says. As we made our way back through the long, narrow tunnel at the end of our tour, David and I got into a discussion about modern biblical criticism. He wasn't buying. Moses wrote Torah, period.

I did think I detected a hint of opportunism when I asked David if he would favor excavations on the Temple Mount itself if they were possible. (They're not possible. It would spark the third intifada or worse.) He said his strictly religious colleagues would think twice, since no one besides the high priest (and that includes archaeologists, no matter how devout) was allowed to see the interior of the the Holy of Holies. But then he smiled and added that university archaeologists probably wouldn't be as scrupulous. He said he'd definitely be interested in seeing what they found.
By Fr. John at 12:31 PM