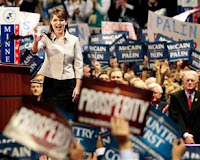 There is a meanness, a disrespect, a vicious partisanship that, if allowed to gain more power, would split this country more deeply and more rancorously than at any time in recent years. And that's saying something.

Ironic, yes. Determinative, no. Though he was a divisive, highly partisan figure whom a significant number of Americans always loathed, Nixon was elected president twice. I bet Palin won't even get nominated. Sullivan's right that her Facebook note helps us understand why. But there's an element he doesn't mention. Yes, her rant, a pastiche of Barack Obama's gaffes, is disrespectful. But that won't lose her any points with most Republicans, I'm sorry to say.

Beyond that, I thought Palin's "Thanksgiving Message To All 57 States" was disrespectful of a solemn, 389-year-old American tradition. That doesn't make her unpatriotic. It just proves that she's irredeemably trivial.

For two weeks I've been marinating in the Thanksgiving statements and proclamations by presidents and many others that my St. John's friend Buddy Lang assembled for his premiere performance of "In God We Trust" at our church. The holiday offers a platform for a thoughtful public figure's reflections on the challenges, opportunities, and bedrock principles of the greatest nation in the world. On this day of family and national communion, Palin's message to her fellow Americans had all the poise and maturity of a high school senior who gets a chance to scrawl something in a rival's yearbook while the principal gives a speech about good manners.

Worse than that, it was all about her. With Palin, it's always all about her. Here she again departs from the new Nixon playbook. From his earliest years in public life, Nixon was fashioning a template for the west's conduct of the Cold War. It began with anti-communism, and about this the ambitious Nixon was utterly ruthless. But Nixon's vision also had a carefully considered and completely internalized second element that had to do with 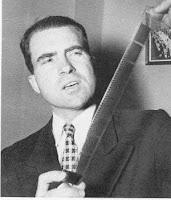 what was best about America being the best way to combat her enemies.

With Palin, all I can discern is her resentment, sense of entitlement, and, yes, Nixonian understanding for how these resonate with certain Americans who have concluded that they're disenfranchised or that Obama represents a unique threat. But what comes next? Specifically, when she's on a stage with other GOP candidates, how will she stack up? What will she have to say about tax policy to Mitt Romney or Tim Pawlenty, about how to run a state government in a partisan atmosphere (and doing so without quitting) to Chris Christie?

Her victim game won't play, because they've all had to contend with the gosh-darn MSM, too. Unless she brings something else to the table, her support will melt away fast. Before the midterm election, the tea party creed was that criticism of lightweights and wack jobs like Christine O'Donnell and Carl Paladino would only make them stronger. We now know that, far right or far left, substance still sells. In the 2012 round, look for the rise of the Whiggish wonk, the Republican Obama. If Palin believed there was any advantage to doing some policy homework, we'd have seen evidence by now. As a candidate for national office, her high water mark was 2008.
By Fr. John at 10:52 AM

This was one of the most unchristian, biased opinion pieces I have ever made the mistake of reading. If you want to see mean spirited, shallow and divisive look in the mirror, or at a picture of Andrew Sullivan. I will pray for your soul and all those in your sphere of influence. Jesus despises self righteous hypocrites.

With respect, this post pointedly criticizes an article Sarah Palin wrote. It criticizes the content, the style and the context in which it was written. It examines the underlying causes to consider what it says about Palin's potential as a president.

How on earth is this disrespectful of a political figure who puts herself in the public eye?? I notr that this post says nothing about her reality show, her daughter's reality show, etc.

Sarah Palin is not the Virgin Mary. Her choice are worthy of examination, and criticism. To say otherwise is to put ourselves in the same mindless, celebrity-worshipping camp as the Obama-ites in 2010.

And Chelsea Handler has a best-selling book out too. Lots of things sell; substance, sadly, is only one of them.