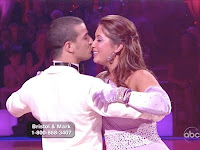 The Washington Post's Sally Quinn says she and her husband (that would be retired Watergate-era executive director Ben Bradlee) are "'DWTS' fanatics." This round, Quinn's voting as often as she legally can for Jennifer Grey -- five times on each of her seven phone lines. As Bristol Palin continues to win, Quinn has discerned the work of sinister forces -- a conservative blog that's teaching people how to vote for Palin using fake e-mail addresses:

Polls have shown that the majority of tea party members are conservative Christians. Are these Christians who are voting 300 times and not using valid email addresses? Doesn't it offend their sense of fairness, if not ethics and morals?

I wondered what I would do if I were Sarah Palin and my daughter were in this situation. Bristol is clearly getting votes she would never have gotten had she not been Sarah Palin's daughter. Those who think they are doing the right thing by doing wrong are only hurting her. They are putting her in a vulnerable position to be vilified by her mother's enemies.