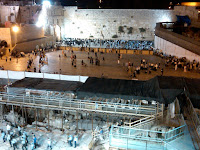 Unconstructive Jewish temple denial by Palestinians, who've issued a new report claiming that Jerusalem's Western Wall is part of the Al-Aqsa mosque and not a remnant of Herod the Great's expansion of the Second Temple. According to the Jerusalem Post, the official who wrote the report says "that the Jews had never used the site for worship until the Balfour Declaration of 1917."

The argument doesn't wash. Excavations in and around the Old City have revealed many other Herodian structures, including further remnants of his wall. Besides, as we read in Wikipedia:

It has been a site for Jewish prayer and pilgrimage for centuries, the earliest source mentioning Jewish attachment to the site dating from the 4th century.

That would be at least 200 years before Muhammad and Islam.

Some Palestinian experts confine themselves to the more elegant and also scripturally sound argument that their forebears the Canaanites were probably worshiping in the Jebusite city now known as Jerusalem long before the Jews even got there. As for proving Jewish provenance on the Temple Mount, all we have to do is excavate beneath it, which I doubt the Muslim authorities would countenance.
By Fr. John at 9:08 AM