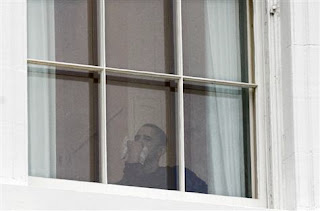 Ever seen a president through a White House family quarters window? Well, here you go: Barack Obama, holding an ice pack to his mouth, watching the national Christmas tree arrive this afternoon. As we know, he got a bloody lip playing basketball and ended up with 12 stitches.

I'm sorry he got hurt, of course. But there was a little payoff for your curious blogger. On Wednesday the Washington Post ran this review of a documentary about presidential photographers. All it has t

o say about Richard Nixon is that he was grumpy with Ollie Atkins on the last night of his presidency, which you perhaps can understand. By and large Nixon was gracious to the people he worked with, and he had a great relationship with Atkins.

Atkins' most famous picture showed Nixon with Elvis. What I was curious about was Obama's favorite picture -- which, according to his official chief lensman, Pete Souza, shows him in a more masterly moment on the court, blocking a shot by his regular basketball buddy and body man, Reggie Love. Of course, I wanted to see it, and thanks to today's mishap, MSNBC ran it. May I also note that it was taken, in September 2009, in the gym of St. Bartholomew's Episcopal Church in New York City?
By Fr. John at 5:16 PM

perhaps now that his royal changemaster (ha!) has been injured, he'll take another look at cutting our flex plan maximums... I've read they are dropping from $5000 to $2000 in 2012. We need those tax breaks Mr. President...

Noted. Now back to comparative religion, you guys!