A Tale Of Two Smuffys 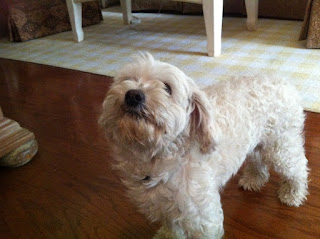 Kathy and I were faithful stewards of this dog for three hours. Our pet proficiency is such that we don't know what breed she was (though, as you can tell, we did establish gender).

"I've got a friend in the car," Kathy said, calling me paws-free as she drove home from a meeting in Santa Ana this afternoon. She'd found her in a residential neighborhood in Orange, darting in and out of the street. She didn't have a collar, and after looking around for someone who was looking around for a dog, Kathy put her in the Honda.

Meanwhile I went to Vons and learned that, since the last time I shopped for a dog about a third of a century ago, Newman's Own has gotten into the dog food business, and you can spend 35 bucks on a leash. I bought three cans of Priority Total Pet Care and a leash (low end) and collar, brush, and dog dish.

Kathy was home by the time I got back, whereupon the dog ate about half a pound of Priority Total Pet Care and began to explore the house. Kathy called her Fluffy, her nickname for her late father. I called her Smuffy, the name of my last pet, a stray cat I adopted in my apartment complex in Brea when I was single about 13 years ago. I got him his shots and got my lease changed to make him legal, only to have him die under my bed after about three weeks.

The logic of the situation seemed inescapable. Since the animal shelter was not an option, we had to try to find her owner. While Kathy lay on the bedroom floor with Fluffy-Smuffy, who was presenting as the most congenial of animals, I made signs with her picture, and we headed back to the corner of La Veta and Shaffer as she sat panting quietly in Kathy's lap.

My heart was full as I taped the signs to utility poles. I felt that we were doing the right thing, we wouldn't succeed, and we were going to be dog owners. Kathy had put Fluffy's new blue collar and leash on her and had wandered down La Veta. Then I looked across the street and saw a mother and two boys leave their house and head for their car in the driveway. I asked if they recognized the the dog. They did. They'd found her on the street themselves and given her to the mother's in-laws. Three

days before, she'd escaped through a hole in their backyard fence. They'd searched and searched.

She sniffed around the boys' feet, happy to see them. We said that the dog had been to Yorba Linda and back, but they seemed distracted by their half of Smuffy's story. "Can we keep her?" one of the boys, Emiliano, asked his mother.

We smiled and handed him the leash. I took the signs down. We were sad and quiet driving home. Would they be more careful this time? Should we have left our number in case they changed their minds? We arrived to a house that seemed a little emptier, two cans of Priority Total Pet Care notwithstanding.
By Fr. John at 5:36 PM