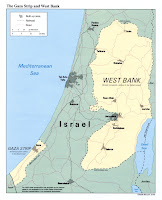 Visit Israel, and you'll learn that its people don't agree on what it stands for. Religion? Ethnicity? Zionism? Democracy? Making sure the Holocaust never recurs? Behaving better than its enemies? More on the question from an LA Times article about Benyamin Netanyahu's effort to persuade the Palestinians to recognize Israel as Jewish state:

Even Israelis don't agree on what "Jewish state" should mean, Palestinians say. Secular Israelis worry such terminology would increase the mix of religion and state. Many Orthodox Jews, meanwhile, believe the Torah forbids the formation of a Jewish state until the arrival of the Messiah. The lack of consensus is one of the reasons Israel never drafted a constitution.