How Do You Not Release "Sherry Darling"?

Re-watching the wonderful HBO documentary about Bruce Springsteen and the E Street Band's "Darkness On The Edge Of Town" sessions in 1977-78, I'm amazed by his stubborn insistence on his vision of a formalistic, unsmiling record rooted in the bottled-up Protestant heart of small-town mid 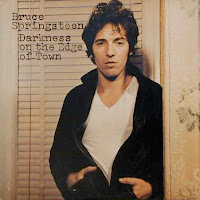 He'd been listening to Hank Williams and other country artists, and they lured him far from Asbury Park and New York City. The revealing videotapes made during the sessions and integrated with present-day interviews in the documentary make clear that his notebooks were brimming with East Coast exuberance -- classic songs like "Sherry Darling" (below, in a 1984 performance in Toronto; four years before, I was in the audience), "Fire," "Talk To Me" (which he gave to Southside Johnny and the Asbury Jukes), "Because The Night" (which he gave to Patti Smith and which became her one and only hit), and the lusty roadhouse rocker "Ramrod" (which he saved up for "The River").

"Sherry Darling" has one of Bruce's most achingly beautiful bridges:

Let there be sunlight, let there be rain
Let the broken heart love again
Sherry, we can run with our eyes open wide before the tide

Neither it nor any of those other songs made it onto "Darkness." Too much love and joy for an album that begins, "Lights out tonight, trouble in the heartland." How many rock stars put that kind of authenticity ahead of sure-fire hits?

Email ThisBlogThis!Share to TwitterShare to FacebookShare to Pinterest
Labels: Bruce Springsteen, Darkness On The Edge Of Town, Songs