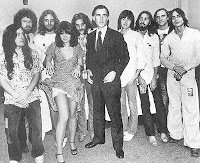 I've always liked Jerry Brown, Democratic candidate for governor of California, as has John Judis at the "New Republic." But as I read along dreamily in Judis's new profile of the candidate, this brought me up short:

[In 1992 Brown] sold [his] mansion, moved to Oakland, and installed himself as the aging leader of a commune, describing himself as a “recovering politician.” He also had a regular radio show on Berkeley’s KPFA, where he aired opinions on capitalism and globalization that would not have been out of place on the World Socialist Web Site. He once referred to President Bill Clinton and Congress as “criminals” who “continue to destroy this country and the world itself.” (Most transcripts of the broadcasts have recently been removed from the Web.)