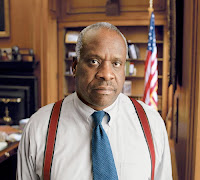 I'm ambivalent about the new round of publicity about associate justice Clarence Thomas's sex life. As the Washington Post is reporting, a former girlfriend, Lillian McEwen, is speaking openly about his anatomical preferences and taste for pornography. I regret that he's being humiliated again. And yet it's possible to see how, by reopening the question of whether he lied to the Senate Judiciary Committee during his 1991 confirmation hearings, McEwen's claims could compromise his effectiveness in office, or worse.

It was during his hearings that Thomas's former staffer, Anita Hill (below), accused him of sexually-charged workplace discourse. He denied it. People's judgments about whether she was telling the truth tended to break along partisan lines. I always wondered why she'd lie and also expose herself to predictably vic 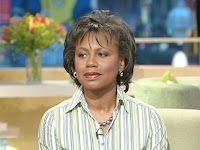 The Thomas-Hill controversy helped us better understand and combat sexual harassment. Thomas himself learned different lessons. His writings and statements, and now his wife's reckless heroics in calling Hill to demand an apology, demonstrate that he remains bitter. I can understand why. Of the countless men who've behaved as he allegedly did in the workplace, why did the first one pilloried before a Senate committee happen to be African-American? As pornography goes mainstream -- 25% of search engine requests are porn-related -- why does what a certain inflexibly conservative justice allegedly watched in private in the 1980s remain news?

Still, one aspect of McEwen's story does seem to be the public's business, even at this late date. She says Thomas told her he'd asked coworkers about their anatomy. It sounds like the comments Hill claimed he made. Confirmation that he behaved like a slob a quarter-century ago wouldn't be the problem. It would be the suggestion that Thomas hadn't told the truth under oath about a private matter. That's exactly what got Bill Clinton impeached and disbarred.

I've heard a couple of times lately that in politics, nothing happens by accident. And yet so far, the Thomas story is playing out like Greek tragedy rather than political conspiracy. Imagine for a moment that Hill was telling the truth. How would it feel all these years to be a fundamentally honorable person sitting on the Supreme Court by virtue of having committed perjury to save your nomination? Perhaps his unsettled feelings contributed to his wife's decision to call Hill, resulting in McEwen's decision to come forward now with her charges, which tend to corroborate Hill's, thus raising the specter of Thomas possibly having lied to the Senate.

However the sorry episode began (and it's important to remember that McEwen was shopping a manuscript about her relationship with Thomas before anyone knew about the Virginia Thomas call to Hill), it's undoubtedly occurred to somebody that the chances have increased, no matter how incrementally so far, for breaking the 5-4 moderate-conservative SCOTUS bloc that might otherwise persist for another decade. Any political machinations that may now occur wouldn't be about sex or anyone's righteous outrage about perjury. Just like the Clinton impeachment, they'd be about sheer power.
By Fr. John at 12:50 PM