Sadness For A Sacred Place 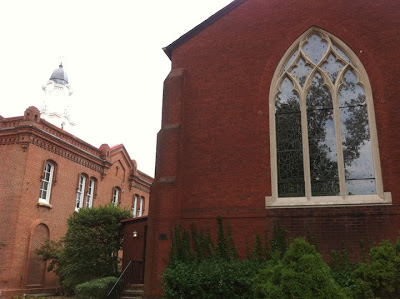 The 129-year- old chapel on the grounds of Virginia Theological Seminary in Alexandria was destroyed by fire yesterday. VTS has helped train thousands of Episcopal deacons, priests, and bishops, including our own Bishop Jon Bruno in the Diocese of Los Angeles.

Visiting VTS in September for an Episcopal schools meeting, I attended Holy Eucharist and Evening prayer services in the chapel that were largely conducted by seminarians. I could tell how much they loved the space and can only im

agine how they and their faculty and alumni colleagues will miss it. Let us pray for a quick rebuilding, if that's possible.

During my visit, I posted this exterior photo on Facebook, which prompted a friendly dialog between two colleagues about the relationship between the seminary chapel and Immanuel Church on the Hill. Wrote the Rev. Peter Ackerman, Immanuel's associate rector:

[W]hat is more commonly known as Seminary Chapel is in fact called Immanual Chapel or Immanuel Church on the Hill. ICOH began as an outreach of the seminary in that very space and since it was on a hill, thereby came the name. When the parish was allowed to run on its own, the seminary donated property down and across the street where they built their office, rectory, parish hall and what is known as Zabriske Chapel. So ICOH the organization is across the street, but the Immanuel Chapel, where we still worship for two service on Sundays, is on the Seminary grounds.

And so we pray for a local congregation in mourning as well.
By Fr. John at 7:21 AM