Blaming (Or Crediting) The Protestants 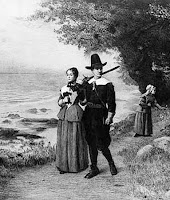 The "Economist" on the Puritan roots of U.S. support for Israel:

[The pro-Israel group] AIPAC would... wield much less influence inside the 21st-century beltway if the Puritan settlers of Massachusetts hadn’t thought of themselves as reenacting the exodus of the Hebrews from bondage in ancient Egypt. When William Bradford stepped off the Mayflower in 1620, he quoted Jeremiah: "Come let us declare in Zion the word of God." Years later, Cotton Mather spoke of the colonies as "an instrument" of the Almighty in establishing "Israel in America". These ideas entered into America’s cultural bloodstream a very long time ago, and they continue to play a crucially important role in predisposing the American people (the vast majority of whom, it should go without saying, are not Jewish) to be receptive to appeals on behalf of the more recently established Zion in the Middle East.