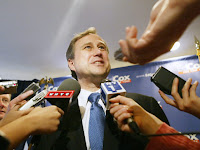 Not too long ago, the tea party's media boosters were saying that establishment critics of TP-approved candidates missed the point by dwelling on some of the candidates' scandalous backgrounds, questionable characters, pervasive gaffes, or glaring lack of experience or qualifications. It didn't matter if mainstream critics said they were wing nuts. Voters would know that kind of elitist hoo-ha when they saw it. All that mattered, it was confidently said, was that, once elected, they'd do the right thing on taxes and spending.

But then came New York GOP gubernatorial candidate Carl Paladino, the TP's most bracing brew, who's mad as hell, who's going to clean up Albany with a baseball bat, and who's polling 24% compared to the 59% lead -- that's a 35-point spread -- now enjoyed by an archetypal political insider and big-government dynast, Democrat Andrew Cuomo.

Makes you wonder what might've happened if state GOP chairman Ed Cox (above) hadn't helped clear the way for Paladino by spending the first half of the year trying to deny the nomination to a more presentable conservative, Rick Lazio, by manufacturing a primary challenge from Lazio's left. Lazio beat back Cox only to be hit on his other flank by Paladino, who was advised by another Nixonite, consultant Roger Stone. Stone got his start in the dirty tricks apparatus launched in 1972 by Nixon aide Dwight Chapin.

It was just the kind of of dual enfilade that Nixon loved -- when performed on Democrats, that is. Since Paladino won the primary in September, Stone has been urging him to soften his presentation, but it's apparently too late. On the other hand, Nixon always liked Andrew's dad, former Gov. Mario Cuomo. Politics works in mysterious ways.
By Fr. John at 9:52 PM

Even in a year of “anger” as opposed to “hope” or “change,” there’s situational outrage and then there are differing characteristics shown by individuals. Sometimes rage works, sometimes it backfires. That’s because anger can get in the way of solutions or it can be something that bonds people and enables them to move forward. Voters often react emotionally to things, without articulating or working through all those reactions. The trick is to anticipate that. (Did you read the review in the Sunday NYT of the new book about Pat Moynihan’s letters? I was interested to see that, as I do, in retrospect, Moynihan argued against some of Vice President Agnew’s heated rhetoric.)

I have a theory that there are certain scenarios where people move away from “go get ‘em” and switch over into “what if it were me” mode. Just as many people who normally would say it’s wrong to lie swung almost viscerally over to Clinton’s side after the release of the graphically detailed Starr report, so too do voters sometimes see a tipping point in angry rhetoric. I recently read about one race where people grumbled about a candidate coming across as too caustic – even in this year of the supossed angry voters.

In the Clinton situation, I think a lot of ordinary people focused on the underlying issue of a spouse straying and thought, regardless of who might stray, “yikes, what if that were me and my family with details of personal transgressions plastered all over the news.” Clinton’s poll numbers went up as that rather than perjury became the defining characteristic of the situation for many voters. Anger, too, can be tricky. With some politicians, I think there’s a point where people sometimes think, “wow, if I had a boss who ranted at me all the time, it wouldn’t inspire me to be a top performer. He might blow his top one time too many and we’d all just hunker down and go into survival mode rather than working together. I’d prefer someone I could sit down with and talk things over when the going gets rough.” It may not point to who would make a good President, but there's a reason why voters sometimes say of a candidate, "he's someone I'd enjoy sitting down and having a beer with." That usually means someone who wouldn't steamroll you or caustically shoot down all your points in a bar convo but a person with whom you could joke and chat.

Thanks, MK. I would even go so far as to say that we don't want angry people anywhere near public office. By definition, anger is visceral, unmediated, and selfish. I don't mean to say it's bad. It actually comes in handy in moments of danger and vulnerability. But a person using agency or state power to work through their anger (or lust, profound sadness, exuberance, or any strong emotion)? No way.

If on the other hand a person has noticed or experienced an injustice and come through anger and outrage to a sense of mature resolve to fix a problem, that's different.

Paladino's acting like he's 12, and voters can tell. I think they also sense some hypocrisy, since while he says he's a regular guy, he's actually a fabulously wealthy elite who's profited from government programs and contracts.