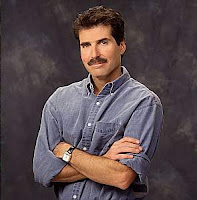 How did libertarian John Stossel ever make it onto network television? Tonight he landed interviews with Reps. Steny Hoyer (D-MD) and Peter Fazio (D-OR), neither of whom could manage much of a defense of the policy he was defending -- massive government intervention in the economy in Hoyer's case, opposition to private toll roads in Fazio's. You get the feeling they'd never been asked the questions before. Then he did an item in favor of medical marijuana and took on government-funded pre-kindergarten classes and former Rep. Duncan Hunter's (R-CA) ineffective 670-mile border fence. This was on ABC. Yes, ABC.
By Fr. John at 10:36 PM

Its been a while since I read it, but I believe in his book "Give Me a Break", he explains that he was well and fully indoctrinated into the liberal worldview out of college (Princeton I believe) and heading into the role of an investigative "bad business buster" journalist planned on staying that way. While on the job though, he began to realize that the emperor had no clothes.

I like his work quite a bit, though he is better on TV than in written form. If you ever run across it, his special on greed is terrific.