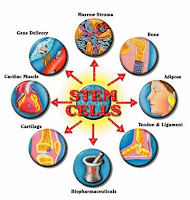 From President Obama's remarks today as he overturned the Bush administration's ban on using federal funds for new lines of embryonic stem cells:

In recent years, when it comes to stem cell research, rather than furthering discovery, our government has forced what I believe is a false choice between sound science and moral values. In this case, I believe the two are not inconsistent. As a person of faith, I believe we are called to care for each other and work to ease human suffering. I believe we have been given the capacity and will to pursue this research -- and the humanity and conscience to do so responsibly.

On several occasions, the President was interrupted by boisterous applause and cheers as yet another hated Bush policy was buried. I'll confess to some relief that those who believe that the earth is 6,000 years old (President Bush probably wasn't among them, incidentally) don't have the influence they once did on science or indeed any other kind of national policy. I also appreciated Obama mentioning his faith. Bush would've come right out and said that God calls us to care for each other and gives us the capacity to make the world better. If the Almighty works better for the President in the passive voice, so be it.

Beyond that, I wish I felt more certain about the issue myself. Opponents of the use of new embryonic stem cell lines argue that adult lines can be manipulated in such a way that they can be just as effective as embryonic lines in research and treatment. Proponents counter that it makes no sense to proscribe the additional resource of new embryonic lines if scientists want them, especially since most of the embryos to be used would be discarded anyway.

What bothers me most is that only the anti-embryonic party is generally referred to as being in the thrall of ideology. I can't help but think that some of the energy behind the policy Obama adopted today comes from those who for any number of reasons don't want society to get too sentimental about embryos. And yet if through some miracle I could have been introduced to the ones that would become my daughters, wife, colleagues, or seminary professors, I would've gotten pretty attached to them.

I do believe that the President probably made the right decision. If he erred, it was on the side of logic, compassion, and hope. And yet there are some who celebrate today for different reasons, who have muffled their reckless wonder at the miraculousness inherent in humanity's smallest, most vulnerable potentialities and want to muffle ours as well. They're ideologues, too.
By Fr. John at 2:09 PM

Hmm... Certainly there is a benefit from the advances that modern science can offer when unfettered by morality, but there is also significant potential for the law of unintended consequences to reek havoc. I maybe misreading him, but the President's view seems to be that "progress" was being slowed by morality, or perhaps that morality and research were in some way incompatible. This is a troubling viewpoint given history.

"and the humanity and conscience to do so responsibly."

I'm not sure how we get the humanity and conscience to responsibly utilize "material" that would most likely have become a child. Are we not condoning and supporting the making of a market for unborn baby parts? I don't think I can get behind anything that legitimatizes something so ghastly.


P.S.- I'm an "old earther" as the evidence in creation seems strongly to lean toward this, but I am not particularly put off by the "young earther's" I know. I find I generally have a lot more in common with them, particularly on subjects that matter, than with people who are convinced that "all this" comes from a random bolt of lightning and a mud puddle.