A Lenten Pause In The Battle 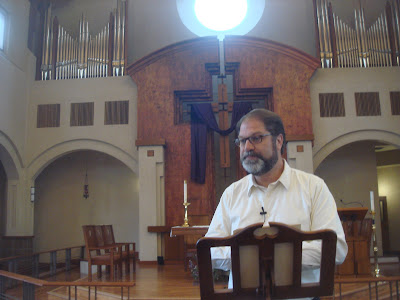 John Moorlach, who emigrated from the Netherlands with his Reformed and Christian Reformed family when he was four, tried to read the Bible as a young man, but he started at the beginning and "got bogged down somewhere in Deuteronomy." He told the St. John's men's group this morning that it never occurred to him to begin with the New Testament. Finally, when he was a 19-year-old student at Long Beach State, a friend suggested he read the Sermon on the Mount, which brought him to Christ in earnest.

He says he's counted roughly 2,000 pieces of financial advice in the Bible, many of which concern saving, prudence, humility, integrity, even portfolio diversification. Trained as an accountant, Moorlach, now 53, caught the political bug from an uncle who employed him on his dairy farm ("I learned what money smelled like," he sa 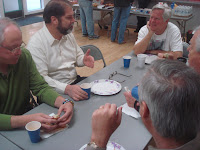 id) and who eventually served on the City Council in Cypress.

In his own political career, Moorlach became a national figure immediately thanks to his prediction of Orange County's $1.7 billion portfolio meltdown and bankruptcy during his unsuccessful 1994 race against Bob Citron, the then-county treasurer who was essentially running a hedge fund with the people's money.

Citron went to jail, and Moorlach succeeded him. In the thick of the bankruptcy, the largest in a municipality in U.S. history, Moorlach did media interviews from 8 a.m. to midnight. In 2006, deciding he could be a better watchdog if he had a vote on policy in addition to a voice on CNN, he won a seat on the Board of Supervisors, where he has battled public employee unions over pensions and, just this week, had his name in the papers yet again. He came to St. John's this morning after reading in the LA Times:

Tuesday's unanimous [Board of Supervisors] vote to suspend a $291,788 education grant with Planned Parenthood followed hours of impassioned public testimony, primarily in favor of continuing the contract.

Ultimately, most supervisors cited moral or religious reasons to vote against continuing the contract.

None of the money is used to fund abortions, said Jon Dunn, president and chief executive of Planned Parenthood for Orange and San Bernardino counties.

The health education contract was approved last year through a $7.5-million agreement with the Orange County Coalition of Community Clinics and funded through tobacco settlement revenue.

The funding, first put aside under Measure H in 2000, has been renewed annually since 2001.

Supervisor John Moorlach, who put the issue on the agenda Tuesday, spoke strongly against supporting Planned Parenthood, and he questioned whether sex education, which is not specifically mentioned in Measure H, is an appropriate use of the money anyway.

"It doesn't say one word about education . . . and now they've gotten it, and now it's an entitlement," Moorlach said.

Planned Parenthood in Orange County has used the contract money to provide health education to dozens of groups including teens and pre-teens at Juvenile Hall, Irvine High School, St. Mary's All Angels School and the Santa Ana Youth Council.

Moorlach (invited to St. John's by men's group member Larry Seigel) said no when I asked if political and media controversy contributed to stress and anxiety, though he did aver that if you're going to be in an unfriendly newspaper article, Saturday's the best day. It may also be that he's too busy to worry. "I've always had a focus on time management," he said. "I do this for you 13 or 14 hours a day; my family gets the rest. I don't worry about what I don't get done and tell myself, 'You only do what you can do'."

Another of our members asked what higher office he he might be considering. Moorlach replied that he planned to run for a second term as supervisor in 2010. While he'd love being state treasurer, he said, conservative Orange Countians don't have much of a shot at statewide office.

When a listener asked if California would ever get its budget and deficit under control, John said, "No. The state's essentially bankrupt." He said the only solution was to put it in receivership under the control of a federal judge. On that hopeful note, we presented him with a copy of the Book of Common Prayer, prayed for wisdom and discernment, and sent him back into the fray.
By Fr. John at 10:23 AM