Everyone Knows Nixon Served Until 1989! 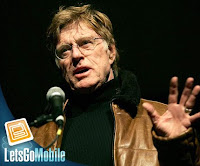 One review after another of "Watchmen," including this one in England's prestigious Guardian, says that the movie's fictional Richard Nixon was serving a third term as President. Evidently reviewers are being thrown off by the opening titles, which show RN reelected in 1976 after a constitutional amendment permits him to seek a third term. But by 1985, when the action of the story occurs, he's on his fifth.

RN's luck's about to run out, though, because at the very end of the graphic novel (I'm not sure about the movie, which I haven't seen yet), a newspaper headline says that "RR" is considering running in 1988. Presumably the reader is expected to think Ronald Reagan. If so, the authors are teasing us. As we learn on "Watchmen"'s very last page, the candidate's actually another famous cowboy: Robert Redford.
By Fr. John at 5:09 PM