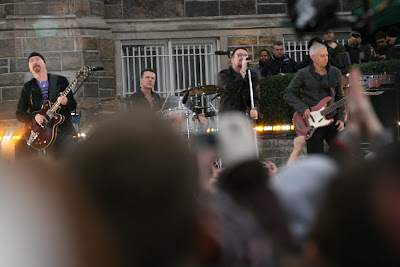 Fordham University IDs were on sale for $300 on Craigslist after word got out that U2 would play a free concert on campus last Friday. The photo above was taken by Tommy Huvane, husband of my wife's younger sister. Tommy even got backstage and met drummer (and band founder, evidently) Larry Mullen, Jr., pictured below with Tommy and his niece. 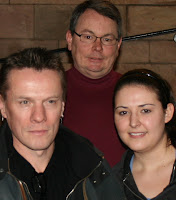 Why did the biggest band in the world decide to play for free on a college campus one morning? It's a Jesuit thing, reports the New York Times:

“You may wonder why U2 chose us,” he said. “They chose us because we’re in New York, because we are Fordham, because of the warmth of the campus.” He drew a parallel between the campus principles of Fordham and those of U2’s members, mentioning “social justice, service of the poor and advocacy.”

Father McShane said he was pleased to see so many students show up for the concert so early — students began lining up at 3 a.m. — and joked that the university would add extra-early classes to the curriculum.