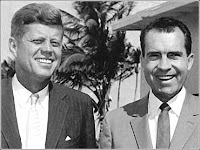 Conventional wisdom holds that Richard Nixon wooed the old South into the GOP column. According to Richard Reeves, the migration began in 1961, when President Kennedy pressured the House leadership to pack the Rules Committee so conservative, anti-civil rights Democrats couldn't bottle up the administration's bills:

Kennedy — and Lyndon Johnson after him — were able to push liberal agenda items, including civil rights legislation, through Congress. But the price was high: over the next 30 years, the Republicans rose. The solid Democratic South became the solid Republican South. At least until last year, when black Southerners came out in record numbers and Virginia, North Carolina and South Carolina were won by Barack Obama.

McCain won SC in 2008; Obama defeated Clinton in that primary.