Valerie And The President Before Ford 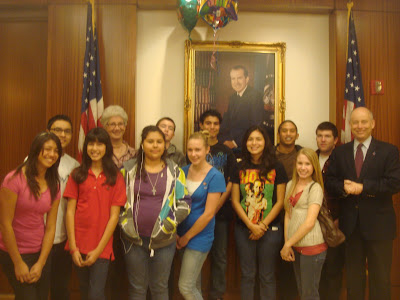 Visiting the Nixon Library last night, high school students from La Habra, California revealed that they had absorbed both the ceremony and substance of President Obama's inauguration. They knew that he and the Chief Justice had flubbed and repeated the oath of office and that Obama's main goal in his address was providing reassurance about the economy. Rarely have I encountered a student group so well informed about current events. These were bright kids, first of all; and these are times that focus everybody's attention on politics more than usual.

La Habra is a middle- and working-class town where Richard Nixon had a law office in the 1930s. There is room to grow when it comes to the kids' appreciation of this dimension of their heritage. My opening shtick with student groups is to ask them to go backwards through time with the last names of Presidents. I got a big, loud Obama and a medium Bush. After that, the correct answers came from city staff, parents, and probably the kids who run for study body offices. This is par for the course for any group of visitors where the average age is 20 or less. "And the President before Ford?" I asked at last. In our group of 18, one said "Nixon" -- Debbie Musser, history alum of UC Riverside, a longtime citizen volunteer in La Habra who serves on the city's youth committee. 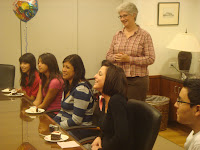 During our early-evening tour of the grounds and museum I was bucked up, as President Nixon would say, by Debbie's enthusiasm as well as our shared experience of anicent times, the era when Mick Taylor was still in the Rolling Stones. We visited President Nixon's birthplace, which is especially evocative at night, comfortingly lit and smelling vaguely like other places we may remember with old wood furniture and floors and century-old textiles, places associated with visits to grandparents and great-grandparents. We did our best to walk the kids through the terrors and ambiguities of the Cold War and the trauma of Vietnam. They learned about RN's world-changing trip to China. They saw the POWs' sacred flag and the President's resignation letter. They lingered over exhibits in a special exhibition containing handwritten inaugural drafts by FDR and Ronald Reagan, also called to reassure and re-energize their anxious people. 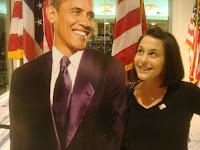 nor of my elder daughter Valerie, who had arranged the visit for the La Habra youth committee and organized it with a cheerfulness and an attention to detail which have evidently made her a legend at 23. Valerie's leaving the City of La Habra for a new job in the Yorba Linda parks and recreation department, and Debbie had brought a cake and balloons. Imagine being dad as the young people took turns praising and thanking Valerie and saying how much she'd be missed. Upstairs, she posed with President Obama, for whom, unlike certain others in the family, she had proudly voted.
By Fr. John at 8:44 AM