Status Quo We Can Believe In 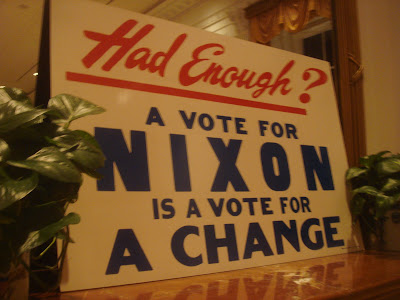 Everyone is making us fearful this week. Dick Cheney says that the relaxation of the Bush administration's anti-terrorism policies, especially the release of certain Guantanamo suspects, make us more vulnerable. On Fox News tonight, Glenn Beck said that since we're on the verge of nationalizing the banks and the stimulus bill looks socialist, that adds up to national socialism, which means we may be about to become another Nazi Germany. This was scary because it was so impossibly, offensively stupid.

President Obama has also been selling fear. Obviously he wants to get his bill passed. But when Senate Republicans said they wanted more tax cuts, he condemned their pleas with boilerplate "failed policies of the past" rhetoric:

Those ideas have been tested, and they have failed. They've taken us from surpluses to an annual deficit of over a trillion dollars, and they've brought our economy to a halt. And that's precisely what the election we just had was all about.

First, this low-grade partisan tongue-lashing ignores the undeniable success of the income tax cuts proffered in their times by Kennedy, Reagan, and George W. Bush. Besides, the Bush deficits didn't paralyze the economy. The mortgage crisis and Lehman Bros. meltdown did. If deficits are really the problem, then after this bill, we'll definitely be toast.

Second, the bill positively bulges with residue of the failed policies of the past. Democrats are taking advantage of the economic crisis by loading it up with massive spending for pet projects, only 5% of which, according to the Congressional Budget Office, will go for rebuilding infrastructure. Go here to see how appalled liberals and progressives are the relatively minor concessions won this week by Republicans -- most of which, many hope, will be undone in conference committee next week.

Third, where's the hope? How about some encouraging, uplifting rhetoric from the leader of the free world about the creative energy and spirit of the American people? This is where comparisons between Obama and Ronald Reagan fall especially flat. After all, it's we who will dig us out of the rubble, not Congress or Barack Obama. Our jobs are being lost at a near-record rate because consumers are saving instead of spending, not just those losing their jobs or homes, but everyone. Instead of defending his decision to spend taxpayers' money on 25,000 hybrids for federal employees to drive, Obama should be persuading people to buy pickup trucks (or Priuses, if he prefers) with their own money. Instead, with his talk of impending catastrophe, Obama can't help but weaken people's confidence even more. That's not leadership. It's opportunism.

Polls show that people don't much like the bill. He'll get it anyway. The economy will recover, as it always does. Recessions last an average of 18 months. Should the current one follow suit, Obama and his supporters will say it was the result of the bill. That's the way politics works. As Obama's big-spending friends keep saying, they won, and the Republicans lost. In a way, it's reassuring. After months of unhealthful idealization, Obama has settled down to earth, and we have the status quo we can believe in.
By Fr. John at 8:14 PM