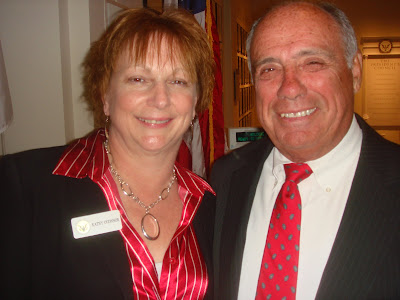 Old friends and former Nixon chiefs of staff Kathy O'Connor and Jack Brennan met up Thursday night for Ann Coulter's talk at the Nixon Library. Former White House military office aide Brennan ran RN's San Clemente office during the difficult years of 1974-80, while Kathy served beginning in 1990 (after ten years as his confidential secretary) and helped the Nixon family through Mrs. Nixon's illness and death in 1993. Kathy joined in the vigil at the President's bedside after the stroke that led to his death in 1994.

Jack was played by the less dynamic and handsome Kevin Bacon in "Frost/Nixon." We haven't cast Kathy yet.
By Fr. John at 10:46 PM