Bearly Having A Clue 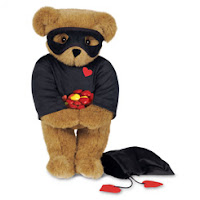 On Feb. 12, the world will mark the 200th anniversary of the birth of Charles Darwin. The annual remembrance occurring two days later, Valentine's Day, is the focal point for a particular type of seasonal TV advertising which tends to undermine Darwin's notions about evolutionary progress, at least in humans.

Every year at this time in the Pajamagram ad, rapt young man leer as their female partners parade in the nighties that have come in the mail. As for the Vermont Teddy Bear ad, it reminds me of those who said about the first 1960 Presidential debate that if you watched it on TV, Kennedy won, while RN won among radio listeners. If you see the young woman in the office getting her Valentine's Day bear in the mail and opening it, the ad's rated G. But if you close your eyes and listen (as her male office mates do) to her high-pitched "oh...oh!" and her exclamation, "It's a lot bigger than I thought...I just want to kiss it," you'd be excused for applying an R.

The ads are aimed at men of a certain age who are evidently unable to plot a correlation between things the women in their life enjoy and some appropriate gift. The teddy bear folks also encourage men to believe that women will think they've been planning the gift for months, as if their wives and girlfriends hadn't seen the ads ten times, too. Such limited discernment skills bode poorly for humans' ability to persist and thrive in challenging environments. Better move: Get 'em a Beagle.
By Fr. John at 11:18 AM