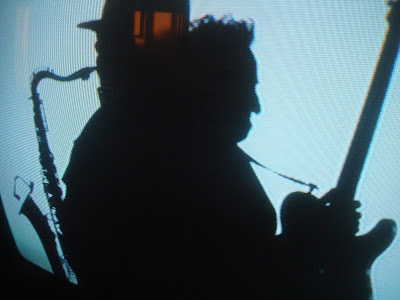 What was I thinking? Whenever Bruce is on TV, he does his "is anyone alive out there?" shtick, which sets up a song like "Light of Day" or, his choice tonight, "10th Avenue Freeze Out" -- a perfect choice for introducing the E Street Band to this 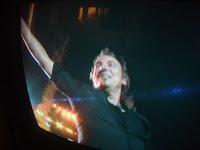 vast audience. The extended intro with the Miami Horns (how ya doing, La Bamba?) is great stuff. I called "Born to Run" right, but who wouldn't have? He shaved a verse and then one-two-three-foured into the title song of his new album "Working on a Dream," and not the second cut, "My Lucky Day," as I unimaginatively guessed. Behind him was a gospel choir, as during the Lincoln Memorial concert kicking off the inauguration, which made this the inevitable Obamanumber. He closed with "Glory Days," one of the teenage angst songs from Born in the USA, his biggest album. Again, I should've guessed. He smoothly substituted "hail Mary" for "speedball" and goofed off his high school buddy Steven van Zandt, even getting a ref to throw them off the stage.

The set opened with an image right off the front cover of Born to Run, showing Bruce and sax player Clarence Clemons back to back. Poor Patti: For the big football game, Bruce needed to call male bonding all the way. Thus did the greatest rock and roller of all time, with an energy and athleticism that defied his 59 years, pack the majesty of a two-hour show into 12 minutes.
By Fr. John at 4:55 PM