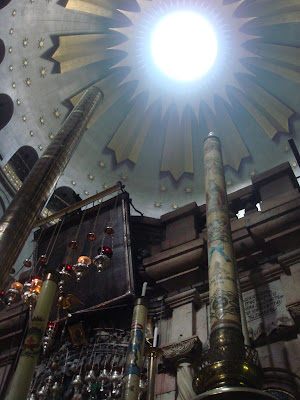 The Church of the Holy Sepulchre in Jerusalem

Barry Kosmin, one of the nation's top researchers on the demographics of faith, argues in a book he co-authored, Religion in a Free Market, that competition among religion groups keeps interest in God high in the USA, even as denominational identity is fading.

Now, you can see that "market" in action: The final formal break-off of a small but significant group of U.S. and Canadian parishes and dioceses from their national denominations and, quite possibly, from the Anglican Communion, the world's third largest Christian denomination, as well.

The Episcopal Church, the U.S. branch of the worldwide Anglican Communion, has been riven by dissent for years over how to read the Bible and whether homosexuals can serve as bishops.

Not to judge Kosmin's book by its title, but Jesus demonstrated that the marketplace and gospel don't mix by cleansing one in the name of the other, his only reported direct use of violence. Post-1960s American Christians do tend to be church-shoppers, tempting pastors and congregations to focus on customer service and nose-counting. We keep God popular by making him seem palatable and relatively undemanding. But the gospel is about giving, not consuming. Christians are supposed to be more interested in the fast than what tastes good. We can't follow the money or the attendance tallies to truth and salvation. As Jesus also showed, it's possible for the ten thousand to be wrong and the one right.
As for Grossman's summary of the Episcopal Church's problems -- the ordination of a partnered gay bishop and differences of opinion about how to read the Bible -- that's about right. In the end, the second problem may be far worse than the first.

By the time we're through, five or ten percent of Episcopalians will probably have left because of the church's purported permissiveness. Which of the remnants, the larger or the smaller, is righteous? The question is complex and emotional. It's about individual dignity as well as the best way to raise children. But the church is learning along with civil society about the permanence of sexual orientation. In 50 years, it could be as unthinkable to deny ordination or a blessing on the basis of homosexuality as ethnicity or eye color.

While progressives may be on the right side of the arc of history when it comes to gays and lesbians, they are whistling past the empty tomb when it comes to Grossman's second issue -- how Christians read the Bible. Tens of millions claim to do so literally, especially many U.S. evangelicals and virtually all those who are threatening to rip the Anglican Communion apart. In a way, it's hard to blame them. As Episcopal theologian Phyllis Tickle has pointed out, Anglican missionaries lugged crates of Bibles to Africa in the 19th century and proclaimed that its every dit and twiddle was the basis of salvation, including passages such as Romans 1:27 which prohibit homosexual relations. It seems almost churlish to complain when some of their bishops take umbrage now that there their newly enlightened U.S. and Canadian colleagues insist it's not a sin after all, in spite of God's authoritative word.

When it comes to Bible rules, some of which are more practical in modern life than others, it's all about authority. Roman Catholics believe God empowered the pope to explain and elaborate Bible rules, making church tradition tantamount to God's own proclamations. Since the Reformation, Protestants have been struggling to find an alternative. What many have fixed on is the unquestioned authority of the written word itself, the doctrine of sola scriptura.

The chasm between these Christians and those who read the Bible using various modern tools such as historical, textual, and canonical criticism is at least as wide as the divide over sexual orientation. Take this passage from St. Paul's First Letter to the Corinthians (14: 34-35, NRSV), for instance:

Women should be silent in the churches. For they are not permitted to speak, but should be subordinate, as the law also says. If there is anything they desire to know, let them ask their husbands at home.

While some churches may follow this proscription, no women I know attend them. Our critical tools give us permission to ask these questions: How did the role of women in the first century Roman world affect Paul's thinking? Could he have been worried that noisy women would put both them and the young Christian movement in danger? Did Paul even write the passage, or did a scribe or follower add it later to reinforce male authority in the church in spite of Jesus's egalitarianism?

Many worshiping in mainline denominations have no trouble asking these questions and yet still honoring the sacredness of the Bible. Conservative evangelicals also make some allowances as well, permitting women to pipe up occasionally but tending not to call them as preachers or pastors -- and whatever they might decide about women, ix-nay on the a-gays.

Authority in the Episcopal Church is rooted in 18th century representative democracy, right down to the bicameral legislature (with houses of bishops and deputies). Believing that the Holy Spirit is present when faithful people gather in community, TEC votes on how to interpret the Bible, when to ordain women and gays, and whether to have fish or steak for dinner. Though Anglicans have a formula for weighing three factors -- scripture, tradition, and reason -- our polity tends to give more weight to reason than the originator of the famous three-legged stool, Richard Hooker, may have intended. After all, smart, well-intentioned people can talk themselves into anything. As for tradition, even that changes as faith communities and denominations change with the times. For some, only Scripture is immutable.

The irony is that many biblical literalists don't realize that in their church practice they're participating in modern scriptural interpretation. Every woman at Saddleback who speaks her mind in Bible study instead of asking her husband to teach her at home is violating St. Paul's literal rule, because some authority in her church has correctly decided that Christ's church can't discriminate so harshly against women in our egalitarian times. But if they set aside Corinthians for the sake of women but not Romans for the sake of gay and lesbian people, then they are being selectively modern. They are choosing when to stick to a literal reading depending on a human predisposition about the sinfulness of homosexual behavior, rooted either in the traditions of the human church or their own intestines.

To a greater or lesser extent, almost every Christian observes some Bible rules and exempts himself from others. Without some central authority to set and enforce rules for Bible living, individual Christians are free to provide their own. The danger is that we will arrive at self-justifying, self-idolatrous interpretations, contrary to the thrust of Christ's radically other-focused gospel. At the root of the TEC schism is the individualistic American tendency for any community to shrink until only the like-minded remain, with the church of one (probably not including Jesus) being the ultimate solution.

For their part, some schismatics rightly fear that progressives are also carving up the Bible, keeping Jesus's humane teachings and the best stuff in the prophets about peace and justice while excluding the bits about righteous living as well as anything smacking of the magical such as miracles and healings. Also up for grabs -- focal point, perhaps, for the coming schism of schisms -- is what the Bible discloses about Christ's bodily resurrection. Whether or not they disclose it at Easter services, many modern churchpeople are squishy about whether Christ's body was literally reanimated. For decades there has been a lot of talk about how he just seemed to be alive again because his memory and teachings were so powerful.

I can't help but think that this is the real deal breaker for the Church, with debates about women, which prayers to use, and the rights of gay and lesbian people being the sideshows. The risen Lord is the hope of the world, not the imperfectly transcribed accounts of his teachings or the wisdom and piety of the human beings in his church. Perhaps Christians need a new fundamentalism with just two pillars: Insistence on the absolute dignity and equality before God of all whom he has made as he made them, and faith that he created the world with a flash of light and saved it with another.
By Fr. John at 8:50 AM