It's Really All About The Shoes 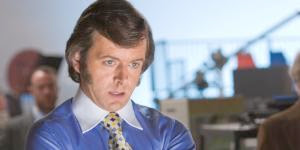 And about the hair

If Oscar buzz is evidenced by every little thing about a movie getting ink before it’s even released to the public, then “Frost/Nixon” is a shoe-in. Booth Moore:

In “Frost/Nixon,” [Michael] Sheen plays dandy British talk show host [David] Frost with all the wide ties, and even wider collars to match. His hair is something of a character itself– coiffed into a perfect helmet and worn with deep sideburns and arched eyebrows — a parody of all that TV journalism has become since that moment. Frost, the forerunner of the modern day metrosexual, is too well-dressed in Nixon’s opinion, his horse bit Italian loafers too effeminate. “I think a man should wear shoes with laces,” one of Nixon’s trusty aides says.

The shoes are a defining point of difference between the two men, between Nixon and a generation he never understood. But in the end, it’s those shoes that bring the characters together in what might be the most poignant moment in the film.

It’s fun to relive Los Angeles in the 1970s for a couple of hours, from the glamour of Frost’s Beverly Hilton Hotel suite, to the inside of the hotter-than-hot Ma Maison restaurant, with Frost’s gal Caroline Cushing dressed by costume designer Daniel Orlandi in a liquid jersey a la Halston.

But what was really a hoot was the first class cabin of the plane Frost took across the Atlantic, with its silver tea service and cocktail bar. Can you imagine? Let’s chew on that as we head out of town on the busiest travel day of the year.