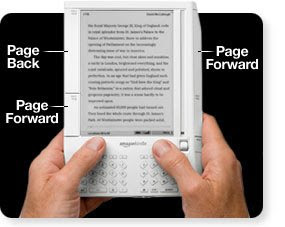 As long as I'm reprising my interests for the sake of my reader (hi, Valerie!), I'll mention my quasitheological faith that the Amazon Kindle will rescue text in general and newspapers in particular. Here's a New Nixon post from March; and here are all my posts on Kindling and the dying newpaper industry. Since I wrote this, the price has come down about $50; there are now roughly 200,000 books available; and the newspaper whose executives I urged to go Kindle have done so (though not, I trust, because of anything I said).

In Border’s last night I picked up a copy of Richard Price’s new novel, Lush Life — but then I put it down again. The discounted price was $25. Amazon’s tempting hardcover price is $15.60, but I’ll keep resisting until I can get it on my Amazon Kindle for $10. Egon in “Ghostbusters” was right: Print is dead. Text isn’t. The Kindle’s going to save it.
Like a true zealot, I want to hold you by the shoulders and make you understand. Every morning before I awaken, the New York Times downloads to my Kindle — every word, sans advertising. It’s 1000% easier to read than on your BlackBerry and 500% easier than nytimes.com on your computer. You can’t balance your computer on your knee and turn pages with one finger while you drink your coffee. You can’t prop your computer on the edge of a book and read it while you’re eating your Cheerios. Your computer doesn’t let you carry around several daily newspapers, the five blogs you’re reading (constantly being updated), and 15 (or 25, or 50) books in a leatherbound package the size of a trade paperback. Your computer doesn’t automatically download beautiful at-rest screens depicting Jane Austen and Alexandre Dumas nor let you change the font size with one button and a click. Addicted to newspapers since I was 16, I’ve picked up the paper Times twice since Christmas (when the Kindle arrived through the blessed agency of my wife). I also feel good about paying for my paper, which I don’t do directly on the BlackBerry or the Internet. Maintaining great newspapers’s correspondents and bureau chiefs in the style to which they have become accustomed is essential to the future of democracy. I’m willing to pay my fair share
The first-generation Kindle costs $400, but that’s got to come down. A friend recently got the comparable Sony reader as a giveaway for flying first class. The Sony doesn’t have the Kindle’s free Internet connection. Still, getting the devices into people’s hands will enable them to begin having the kind of influence on text markets that will give publishers the information they need to plan for the inevitable revolution in how we read. Kindle now offers nearly 110,000 books, virtually all for $10 or less. The offerings are irritatingly spotty — where’s Lush Life? — but they’re getting better every day. Once you’ve bought a Kindle book, you own it forever. The system keeps all your notations, and you can store them on Amazon’s server when you don’t need them on your Kindle. If you’re into the look and heft and smell of books, if it’s reassuring to line then up and gaze at them, let me help you get over that. I used to feel the same way about CD jewelcases. I wanted the cover art, lyrics, and production credits. Then I went to iTunes and paid $10 for music for which Tower Records was charging $16 or $18. Tower Records has taken its jewel cases and gone home.
The miracle of the iPod and Kindle has as much to do with reforming and, one hopes, revitalizing markets for content as with the convenience and fun of the gadgets themselves. When I hear that educated young people are too cool for newspapers, first I feel old. Then I realize that I’m reasonably cool, too, since I probably know more than they do about how China is dealing with political dissidents in the runup to the Olympics just because I saw the Times this weekend. If they read about China on MSNBC or a blog, that source probably got a lot of what it knew from the Times. We need great newspapers because they cover the world with depth and discernment that takes a load of money in a culture that seems to believe that knowledge really is free. So get a Kindle and help reform the text market. Give a Kindle to a kid and make good old-fashioned journalism cool again.
By Fr. John at 6:14 PM