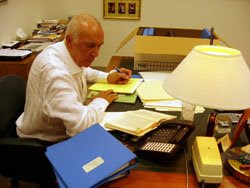 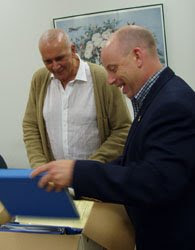 The Wall Street Journal interviews Frank Langella, whom Roger Elbert favors as winner of the Academy Award for best actor for "Frost/Nixon":

I liked Richard Nixon and I liked playing him. I don't think he'll ever be gone from me, because something about the man is just very powerful. His pain, and the obviousness of his pain, stays with you. It's not a sentiment that's new to any of us -- you could see it on him at all times, his discomfort in public -- but I discovered he could be equally funny and charming. He just wasn't a relaxed man, and was forever churning away, trying to achieve greatness.

In July 2006, while preparing for the Broadway run of Peter Morgan's play, the actor visited the Nixon Library, talking to those who had known the President and spending over an hour studying the materials he had used to prepare for the Frost interviews in 1977. (That's me, showing him the binders.) He cheerfully owned the fashionably anti-Nixon, anti-Vietnam views he'd held in the 1970s. But unlike Sir Anthony Hopkins, who made a half-hearted PR visit to Yorba Linda before appearing in Oliver Stone's bizarre fantasy "Nixon," Langella said he was aiming for a fleshed-out, empathetic performance.

Director Ron Howard chose the Library's White House East Room to film Langella's performance as RN saying goodbye to his colleagues on August 9, 1974. It was a painful moment for the country as well as the President and his family. My colleagues Kathy O'Connor, Sandy Quinn, and I watched Howard and him film three takes. His performance was dignified and powerful. Afterwards, he left the set and walked toward us, still in character, and gave us a hug. We gulped and called him "Mr. President."

***
While my elder daughter, her nice friend from high school, my "follower," and I await further readers, I thought I'd note the exchange of comments on the New Nixon version of this post.
By Fr. John at 10:13 PM