This Pretty Much Sums Up RN's Problem 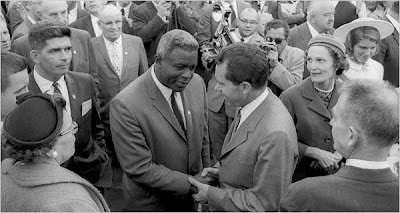 Richard Nixon and Jackie Robinson were friends, though their relationship cooled in the 1960s when Robinson decided Republicans weren't serious about civil rights. RN was, throughout his career. And yet not long ago CBS's Bob Schieffer, describing the time Sammy Davis Jr. hugged President Nixon, got a cheap laugh by saying, "I don't think he had ever been touched by a black person before."

Respected journalist, cheap shot at Nixon. Par for the course. That's why Nixonians must blog on.

And the Episcopal bit? Isn't the U.S. arm of the worldwide Anglican Communion similarly maligned and misunderstood?

I'll mainly be blogging at The New Nixon for the time being, but I wanted to get a toe in the water in my own little backwater as well.
By Fr. John at 9:32 PM