The Deaths Of Journalism 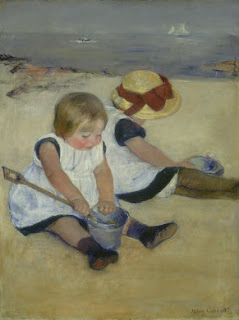 Mary Cassatt's Children Playing on the Beach, or a painting much like it, stars in Daniel Silva's riveting thriller Moscow Rules, about a Russian oligarch whose promiscuous weapons sales put him in bed with al-Qaeda. The deal with the devils is uncovered by a brave editor in Moscow.

A former UPI foreign correspondent who's married to NBC's Jamie Gangel, Silva, in his author's notes, reminds us that while journalism appears to be dying in the U.S., elsewhere it's the journalists:

According to the Committee to Protect Journalists, 47 reporters, editors, cameramen, and photographers have been killed in Russia since 1992, making it the third-deadliest country in the world in which to practice the craft of journalism, after Iraq and Algeria. Fourteen of those deaths occurred during the rule of Russian president [now PM] Vladimir Putin, who undertook a systematic crack-down on press freedom and political dissent after coming to power in 1999. Virtually all the murders were contract killings, and few have been solved or prosecuted.

Silva also thanks Jean Becker, "amazing" chief of staff to former President and Barbara Bush (Mrs. Bush was transferred out of ICU today after her ulcer surgery, thanks be to God). Hear hear! Jean has also extended many kindnesses to the Nixon family and Foundation over the years.
By Fr. John at 4:08 PM