When The Family Isn't The Legacy 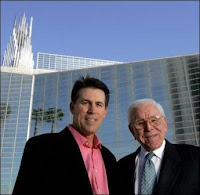 R. Scott Moxley's assessment of what happened at the Crystal Cathedral is hard to read but deserves to be taken into account as what remains of the great congregation splits between devotees of Robert H. Schuller's family and the magnificent church he built in Garden Grove:

As I revealed in an April 2011 column based on bankruptcy records, Schuller, his extended family and closest aides--all of whom you could fairly call helplessly rich--diverted large sums of church donations to live exceptionally well. Not many American families enjoy vacation homes in Laguna Beach, Big Bear, Hawaii and Colorado--all private retreats that gave the Schullers much needed breaks from counting all those stacks of incoming dinero. The church's top ex-businessman lives behind guards and gates in Newport Coast--Southern California's most exclusive, ocean-view residential neighborhood that has been called home by mega-millionaires Kobe Bryant and Dean Koontz.

The bankruptcy records annihilated the deceitful, cemented facade that Schuller's every waking moment was devoted to helping the needy. For example, at one point when the ministry nabbed donations of more than $14 million, the Schuller clan directly grabbed hundreds of thousands of dollars while it spent just $22 a day to feed the poor.

It's no surprise then that the final straw in Schuller's decision to angrily leave the church board and threaten legal action involves not God, not the poor, not preaching but rather his own finances. Despite the millions and millions of dollars he, his family and closest aides have taken over the years, the reverend wants the faltering church to guarantee him payments of almost five times the local median household income: $320,000 a year.

What strikes me about this debacle isn't so much the money that Schuller earned and properties he accumulated in his half-century of ministry but the number of his family members who also ended up on the board and payroll. His break with his son and apparent successor in 2008 appears to have been a watershed. Was it a dispute over theology, or was a charismatic pastor and leader having trouble passing the baton? Instead, his daughter Sheila stepped into the pulpit as senior pastor. Her sister and brother-in-law had executive jobs with the "Hour of Power" broadcast, and h

Over the last week, as independent board members finally asserted themselves, the family members were fired. Schuller and his wife resigned from the board over the weekend. Next Sunday, Coleman will take what remains of the congregation and worship elsewhere. Within three years, the Crystal Cathedral, whose remaining non-Schuller clergy promise to continue to hold services for the time being, will be the seat of the Roman Catholic Diocese of Orange County, which purchased the building for $57 million.

When we differed over management of the Nixon foundation and the need for an independent board, Richard Nixon's son-in-law Ed Cox liked to say, "The family is the legacy." At the Crystal Cathedral, not so much.
By Fr. John at 9:02 PM