Tales Of The Founder 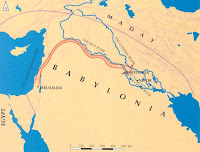 Breast cancer was born by the rivers of Babylon, according to Discover:

The breast-cancer mutation 185delAG entered the gene pool of Jews some 2,500 years ago, around the time they were exiled to Babylon. Random and unbidden, the mutation appeared on the chromosome of a single person, who is known as the founder. In the same sense that Abraham is said to have founded the Jewish people, scientists call the person at the top of a genetic pyramid a founder. This particular founder was born missing the letters A (for adenine) and G (guanine) from the DNA chain at the 185 site on one copy of his or her BRCA1 gene. BRCA1 is a tumor-suppressor gene; the deletion of the two letters disabled its protective function. But the mutation wasn’t immediately harmful to the founder because he or she had another copy of the gene that worked.

Researchers have no idea who the founder was, but they can deduce from historical evidence when he or she lived. When Jews were permitted to return to Jerusalem after their captivity in Babylon, not all the exiles went home. The ones who stayed behind are the ancestors of Iraqi Jews, whose numbers are today much reduced but who for centuries constituted a venerable center of the faith. In addition to the Jews living in Mesopotamia and Jerusalem, satellite immigrant communities sprang up elsewhere in the Middle East. A decentralization of the gene pool had begun, and the distances between groups acted as barriers to the exchange of DNA, barriers that have persisted into the modern day. When scientists in Israel tested BRCA1 carriers from the dispersed Jewish populations, they discovered that all shared the same basic spelling in the genetic region of 185delAG. But some of the matches between Jewish groups were off by a letter or two, which indicated minor changes since the groups had split. Rolling back the demographic clock, the scientists inferred that its founder must have lived before the groups divided—that is, prior to the Babylonian watershed.