The Alpha And Omega Of A Great Love Story 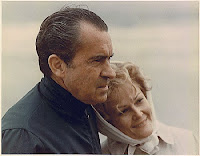 Antidotes to cruel, unproven denigrations of Richard and Pat Nixons' marriage are the passionate letters the young southern California attorney wrote to his beloved during their courtship in the 1930s, such as this one:

Somehow on Tuesday there was something electric in the usually almost stifling air in Whittier. And now I know. An Irish gypsy who radiates all that is happy and beautiful was there. She left behind her a note addressed to a struggling barrister who looks from a window and dreams. And in that note he found sunshine and flowers, and a great spirit which only great ladies can inspire. Someday let me see you again? In September? Maybe?

At the end of their first date, Mr. Nixon proclaimed to Miss Ryan that he intended to marry her. She wasn't quite as sure. The letters he used to help close the deal go on display this week at the Nixon library, where longtime curator Olivia Anastasiadis (below), couldn't be prouder, according to the AP:

These letters are fabulous. It's a totally different person from the Watergate tapes that people know. President Nixon started out as an idealistic young man ready to conquer the world and with Pat Ryan he knew he could do it. There's

a lot of hope, there's a lot of tenderness and it's very poetic. He loved her, he was absolutely enthralled by her and that's all he thought about.

Those alleging that 37's tender feelings for his bride didn't survive the rigors of their public lives should have heard what his last chief of staff, Kathy O'Connor, who knew both Nixons as well as any of his aides, said in an October 2008 talk at the Nixon library to women serving in government:

The President and Mrs. Nixon enjoyed nothing better than the opportunity to make each other laugh. Since he had spent so much of his working life on the road, the delight that he took at home with his First Lady and their four grandchildren is impossible to overstate.

One day in the late 1980s, I followed the President home from the office because I had forgotten to give him a file he has asked me for before he left to go home for lunch with Mrs. Nixon, which was his daily practice.

I raced into the kitchen, which had a one-way glass wall looking out over the deck where he and Mrs. Nixon would eat lunch when the weather was good.

Just as I arrived in the kitchen, the President was walking across the deck toward Mrs. Nixon, who was

waiting to greet him with a smile and hug. He pulled out her chair and helped her take her seat. She smiled at something he said. I’m pretty sure she blushed.

When the Nixons’ critics say, as they sometimes do, that their relationship lacked affection and intimacy, I always smile, remembering that precious, private moment. I even told director Ron Howard about it when he visited the Library last year. We’ll have to see if he includes the scene in his upcoming movie, “Frost/Nixon”!

Great piece John. Thanks for using excerpts from my speech! Love the photo of RN and PN, too. Remember how RN would say he did not like the beach photos of he and PN because they looked too informal even though I think he was wearing a tie under his windbreaker. LOL xo

Many thanks to Kathy for sharing her remembrances of Mr. and Mrs. Nixon, a small sweet glimpse of their lasting and genuine relationship.

If I remember it correctly, young RN would drive her from Orange county to downtown LA, sometimes even when she would be meeting another young man. Now that is a man head over heels. Especially when you consider that would have been 30 or 40 miles on dusty farm roads, one way. I believe he proposed to Pat watching the sun set in the Pacific from a cliff in south OC. Very Romantic.