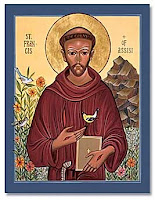 Jamie Arpin-Ricci on the quiet radicalism of St. Francis of Assisi:

What made his life so appealing to so many? Among other things, Francis's love for Jesus was so explicit that he was naive enough to believe that Jesus actually meant for us to do the things he taught us. And while such a radical devotion often led him to extremes -- like when he interpreted Jesus' command to "preach the gospel to every creature" and so began to proclaim the good news to the birds -- it also produced in him a commitment to love God through loving others, especially those who lived on the margins of society, such as the poor and the lepers. He managed to draw to his movement both the simpleton and the academic, the lawyer and butcher, because his was a faith of actively imitating Christ.

Francis lived in a time when the church had taken for granted its position in the culture. Often compromised by wealth and political power, the church had lost credibility among the people. Many would worship Jesus at Mass, but few truly followed his teaching or example. Francis became a reformer, not through angry protests and recriminations against the corrupted clergy, but through his life of humble yet fearless obedience to Jesus. In other words, he knew that the best rebuke of the bad was the embodiment of the better.