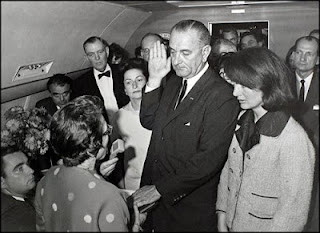 The April 2 New Yorker presents a meticulously researched account by LBJ biographer Robert Caro of the day Lyndon Johnson became president. It culminates with his stage-managing this iconic scene above Air Force One as it idled on the tarmac in Dallas -- making sure Mrs. Kennedy and her husband's casket were aboard and that she would be present to lend her legitimacy to the transition of power, for the same reason demanding that as many Kennedy assistants as possible cram into the stiflingly hot stateroom, arranging the placement of the photographer and witnesses, researching the words of the oath, and deciding that it would be administered a federal judge, Sarah T. Hughes, whose appointment he'd favored as vice president but whom the Kennedys at first had blocked:

The scene was still eerie: the gloom, the heat, the whispering, the low, insistent whine of the jet engine, the mass of dim faces crowded so close together. But one element had vanished: the confusion. Watching Lyndon Johnson arrange the crowd, give orders, deal with [Kennedy aides Ken] O'Donnell and [Larry] O'Brien, [Johnson aide] Liz Carpenter, dazed by the rush of events, realized that there was at least one person in the room who wasn't dazed, who was, however hectic the situation might be, in complete command of it.

In the agony of the moment, Johnson encountered resistance from Kennedy aides, some of whom didn't like him and didn't think having the ceremony in Dallas was necessary. Johnson had become president the moment Kennedy died; wasn't that enough? But Johnson understood the stricken country needed to witness the continuity of authority, and there was no better way than to conduct this sacred ritual. His left hand rested not on a Bible but a pocket-sized Roman Catholic missal.
By Fr. John at 7:24 PM