Turin Jesus On His Face

Historian Thomas de Wesselow says that the Shroud of Turin (thought by many to be a medieval forgery) actually was Jesus's burial cloth and that its ghostly imprint tricked the disciples into thinking he'd been raised from the dead. At least in the Huffington Post article, de Wesselow doesn't say why the shroud's Jesus, who may well have had Semitic features and was pro 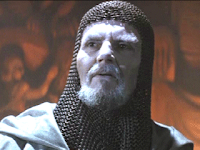 bably in his early thirties when he died, looks like the English knight who guards the Holy Grail in "Indiana Jones and the Last Crusade."

The article concludes with a predictable question:

What remains to be seen is how Christians around the world, who are about to celebrate Holy Week and Easter, will respond to de Wesselow's assertion that the bodily resurrection never happened.

Same way we do every year: Proclaim "He is Risen!" and go forth in the name of the risen Christ.
By Fr. John at 1:47 PM