The Power Of Negative Thinking 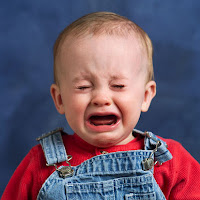 Why do we focus more on bad than good experiences? Why is it so hard to hear criticism? For the usual reason: Because we're wired to survive. Alina Tugend analyzes the scholarly work of Roy F. Baumeister:

In an experiment in which participants gained or lost the same amount of money, for instance, the distress participants expressed over losing the money was greater than the joy that accompanied the gain.

“Put another way, you are more upset about losing $50 than you are happy about gaining $50,” the paper states.

In addition, bad events wear off more slowly than good ones.

And just to show that my family’s tendency to focus on the negative is not unusual, interviews with children and adults up to 50 years old about childhood memories “found a preponderance of unpleasant memories, even among people who rated their childhoods as having been relatively pleasant and happy,” Professor Baumeister wrote.

As with many other quirks of the human psyche, there may be an evolutionary basis for this. Those who are “more attuned to bad things would have been more likely to survive threats and, consequently, would have increased the probability of passing along their genes,” the article states. “Survival requires urgent attention to possible bad outcomes but less urgent with regard to good ones.”